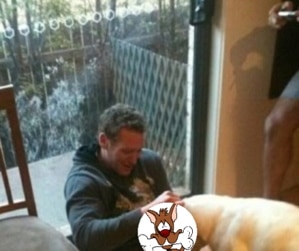 The fun you can have on a Monday night hanging with your team mates, a mobile phone camera, a rabid twitter account and a very willing dog…

Things aren’t looking to bright for soon to be ex Aussie rugby league player Joel Monaghan. Why? Let’s just say it  involves a little more imagination than you’re probably comfortable with. That said deep breath and read along with us…

Lifeissavage: The Ozzies never cease to amaze me hey. Just when you think they can’t make it easier for us to laugh at them they go and do dumb sh*t like this.

Sheep all over the country are jumping with joy at the news that Australian Rugby League player, Joel Monaghan was photographed getting to know a teammate’s dog a little better.

Of course our immediate impulse is to say boys will be boys, even if some boys like to go the extra mile and show us other boys that as long as ‘jingle Linda’ is getting tended to it needn’t matter if it’s a human being on the uhm ‘giving’ end. But unfortunately what may have stayed a sworn secret amongst intoxicated team mates suddenly became a world wide sensation the minute one of Johnny’s team mates took a picture of him letting one poor pooch go one place no animal should ever have to go to and uploading the mobile image to his twitter account and twitting the image ad finitum.

The Sun: Canberra CEO Don Furner was dumbfounded and appalled by the image of Monaghan and a dog, which was posted on the social network site Twitter before Melbourne radio station SEN named the Raider yesterday morning.

“It is something he will live with for the rest of his life,” Furner said. “It’s a big cross to bear for doing something stupid out on the drink.

“The perils of the media and social media today are a great example of why you shouldn’t do it.”

In case you’re wondering who CEO Don Furner is- it’s Monaghan’s soon to be ex boss. Which makes us wonder you can make the mistake of having sex with your bosses wife, his son, his brother even, but the minute you have sex with a dog and the shit makes it to twitter you can rest assured that your boss and the rest of the world will never forget one particular episode you happened to have one Monday night.

For those brave enough, intrigued or even perversely in that kind of ‘mood’ Johnny can be seen in the flesh the next page over having himself a very grand old time. You have been warned…