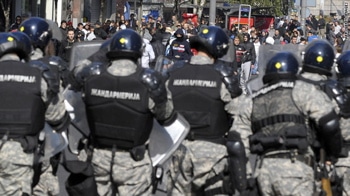 How much violence do you need to endure before you become socially relevant?

1,000 people confronted threats of violence in Serbia’s first gay pride parade in almost ten years. Activists were escorted by 5,000 police officers, needed to protect them from 6,000 protesters armed with stones and molotov cocktails.

‘Right-wing extremists’, dressed in black and holding crosses, reportedly, set the Democratic Party headquarters on fire, and left 124 officers injured, along with 17 civilians. No word yet on how many will be arrested, but those are ‘during the night and in the coming days’ could face up to eight years in prison. Quite a length to go to voice your displeasure over another person’s sexual preference.

CNN reports, “Interior Minister Ivica Dacic had urged people to allow the march to go ahead without incident,” one of the marchers, named only Nikola, stated “After the beatings, after living in fear, this is what we needed, to become visible.”

Along similar lines,  it seemed the Serbian government had strategically prepared for a high profile spectacle. For, as CNN stated, “international diplomats were scheduled to observe it, according to the interior ministry.”

While last year the show march was simply cancelled, this year the ministry was at least willing to help relieve these oppressed people of their extremist-imposed silence, and aid them in their fight for equality, even if it costed “around one million euros (1.39 million dollars),” to stage.

That is, as long as some high foreign profile diplomats got to see the administration in all its bravery…

No matter their intentions, as another protester, named Sara, said, “This is the first step on a long road but I’m happy that it finally happened.” No doubt she’s right, as all the world’s media is finally blogging.

But still, why is it that violent opposition is almost always necessary before a society can come to terms with change, and might we someday find a better, more bloodless, way to traverse the dialectic of progress without the crutch of having to make a spectacle of it  so foreign diplomats (most likely with deep pockets) can see it? And if things had gone over peacefully, would we even have bothered to blog about it?