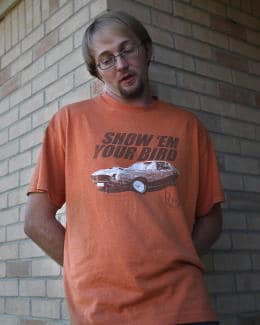 Four soldiers stationed at Texas’ Fort Hood base committed suicide last weekend, adding another four victims to what’s now being called a ‘silent national epidemic.’ Though treatment remains available, it seems soldiers feel reluctant to submit to it for it for fear that a PTSD diagnosis will ‘show weakness”don’t ask don’t tell’ refers not only to hiding one’s sexuality, but also describes the preferred option for dealing with all personal ‘problems’ in the military. This is not a way for brass to say they ‘can’t handle the truth,’ but that they simply have no time or interest.

And if some of us choose to wonder why there’s such a stigma to the treatment, perhaps its that, in order to attempt to cope, trained killing machines must forcibly to submit to something quite like this:

The troops watch films with titles like, I Will Never Quit on Life and Shoulder to Shoulder. Actors perform interactive skits and role-play with the soldiers. Fort Hood even hired a comedian who cracks a few jokes before speaking seriously about his struggle with alcoholism and his own brother’s suicide.

No wonder, we could well imagine, at least one of the most recent victims,Timothy ‘Ryan’ Rinella, “had trouble taking some of the counselors seriously.” Imagine, even the ones who’ve been assigned to help you can’t help but laugh at you: what better reason to come to the conclusion that your life is nothing but a Kafkaesque comedic tragedy?

Though, some say, these sessions should be mandatory, why would it even matter when, at least reportedly all ‘they’ do is “give [the veterans] two or three days worth of, ‘Blah blah, blah it wasn’t your fault, you did what you had to do, blah, blah, blah,’ and then they turn them loose and they expect them to live with this.” Talk about giving the already disturbed among us more impossible expectations… the likes of which, no doubt, become exacerbated by the problem that, as with most epidemics, we don’t even know how to treat it.

As Tom Tarantino, senior legislative associate for Iraq and Afghanistan Veterans of America, says, the contemporary war experience appears unlike all the those before it.

“There is a difference between a World War II scenario, where you’re gone for the duration and then you come home when the war is over, and the situation right now, where … you can count on being consistently rotated in and out of a combat zone for a year at a time,” Tarantino said. “You have a force that has a high potential for breaking and that’s why you’re seeing these high suicide numbers.”

Whereas before soldiers only went to hell and back — at least granting than the mental sanctity of having a ‘before’ and ‘after’ –  now the experience has become cyclical, and seemingly perpetual.

Which, perhaps, can help us with the ‘why’ question here: beleaguered by unending, uncontrollable repetitions of increasingly nightmarish experiences both from without and within, don’t you think that you’d perhaps consider a similar solution as your only way of ever really coming home again?