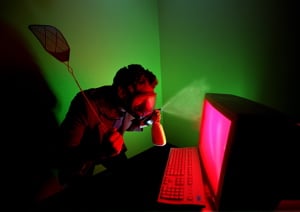 J. Alex Halderman, a professor at the University of Michigan, with only three days notice has managed to taking nearly complete remote command of the US Government’s very own proposed online absentee voting system — even going so far as to rig it to play the Michigan fight song…

Only 36 hours after the election officials enticed the online public to try their luck at cracking their supposedly impenetrable code, as Halderman explains on his blog, “[his] team had found and exploited a vulnerability that gave [them] almost total control of the server software, including the ability to change votes and reveal voters’ secret ballots.”

Which means our dreams of voting from our iPhones as to avoid lengthy lines and have more time to focus on our Tweets may be yet still rather far away, for, as Halderman suggests, even the government’s most powerful design “is brittle: one small mistake can completely compromise its security.”

That a nutty professor and two of his pupils can, in a short timeframe,  hack the government’s tightest information systems, seems at first, a sign of weakness, it is, if anything, exactly the opposite. Whereas at the onset of online culture authorities had taken to fearing hackers, often jailing them for relatively minor offenses now they’ve begun conscripting them — like all other perpetual users in the web 2.0′s interactive culture, free of charge.

So much for the days of online outlaw romance, and for being a a hacker-cum-flaneur, now that the very act of attempting to experience the system to its fullest, to (as good hackers ought to), to push it to its limits, makes the user a veritable wageless laborer to it.

Which is to say, no longer is ‘outsmarting’ the government a crime, but, instead, a public service to it.