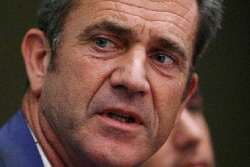 Amidst reports that Zach Galifianakis objected to Mel Gibson’s Hangover 2 cameo, the former Bravehart actor-director and alleged spousal abuser is said to be ‘furious.’ Perhaps we should begin to brace ourselves…

Gibson’s offer, to play a Bangkok tattoo artist (no doubt some kind of sexual innuendo), was recently rescinded and given to former Star Wars actor Liam Neeson. Hopefully for Liam the role doesn’t require any screaming since no can really compare to Gibson.

Reportedly, the decision was made when “cast members objected to working” with the outspoken recovering alcoholic and ultra conservative Christian who believes that basically everyone other than him has their own personal (and eternal) Hotel Hell reservation.

The whole picture seems to crystallize when considering that Galifianakis expressed vague concerns recently in a podcast interview for Comedy Death Ray. He stated, “I’m in a deep protest right now with a movie I’m working on, up in arms about something. But I can’t get the guys to [listen] … I’m not making any leeway.”

While Gibson “doesn’t understand” why Mike Tyson, a former drug user and convicted rapist, “was given a chance [in the first ‘Hangover’ movie],” and he was “kicked to the curb” (especially in light of Tyson’s awful facial tattoo decisions), the decision does seem more than understandable. Who wants to work with an actor who’s liable to snap at any moment, and whose rage could become veritable vicious cycle?

But what these all too typical producers don’t realize is the online opportunity they’ve missed out on: imagine having rights to all Gibson’s angriest on-set blowups. I, for one, would be feeding him Gin and Tonics and recording it with my cell-phone for maximum ‘realness’ and YouTube exploitation potential. From what I can see across the table our editor here concurs…