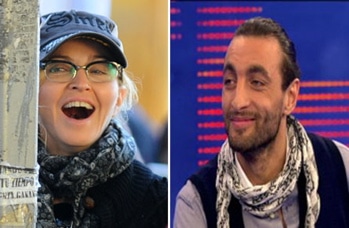 Swapping tongue juice in public lets us know Madge is in love again.

Madge has been celebrating her new lust love for the newest man boy in her life- Brahim Rachiki, a pirouetting lad who wears the meanest dance expressions in town and who knows how to give Madge a run for her money when it comes to swapping puddles of tongue saliva at your preferred downtown NYC club.

D listed: At a club in NYC on Thursday night, 52-year-old Madge was seen sucking the precious life out of 33-year-old Barhim Rachiki, a choreographer on her Dry & Itchy tour, and Baby Jesus was nowhere in sight. Seriously, the source checked under the banquettes for Baby Jesus since toddlers like to play hide & seek everywhere, but he wasn’t there.

Indeed Michael K, the reason Baby Jesus wasn’t nestling on his former mamma’s nipples is because Madge has done an about face and gone looking for new hot blood that will breathe sunshine rays into her daily exfoliated skin cells. But then again according to Baby Jesus, Madge was just a friend that he has since moved on from. But where there is a camera will, there is a way…

The source tells Page Six about Madge and Barhim’s night together, “They came in together and were holding hands in a private area. Madonna got up and was dancing for an hour straight before going back to her man. They immediately started making out in front of other guests.”

Which reminds us going forward to keep our I phone picture lenses fully charged in the event media whores like Madge decide to make a public appearance with their new conquests friends.

One day when Madge is looking at old photo clips of her strumming it up in the city she’ll wonder why she never married the hot thangs that clawed at her when she’ll whisper into the camera man’s ears taking a picture of her ‘it’s because I could never bear the thought of cheating against my real love- my fans.’