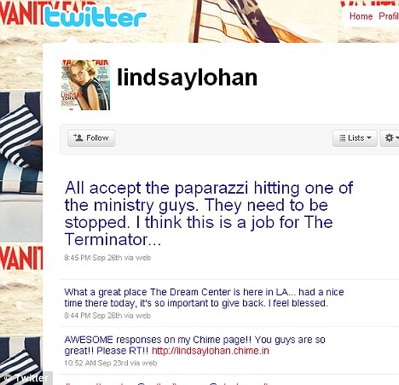 Lilo, always the trendsetter, is now being treated not just for addiction to substances (which ones we can’t be sure exactly), but also to Twitter.

According to the Daily Mail, “[a]n insider revealed: ‘She is only allowed to use her phone for two hours a day, and only to keep in touch with her family and close friends.

‘Before, she would repeatedly and compulsively email her friends if she was ever in a situation where she felt lonely, and she would vent on Twitter.’

The implicit connection between the internet user and the drug user, specifically the addict, has noted elsewhere (and often at length) at least as far back as the character Case in William Gibson’s Neuromancer,  the text that created the term ‘cybersace.’

But recently, writes the Daily Mail, that fictional fantasy has begun to gain some credence: “neuroscientist Baroness Susan Greenfield argued that sites such as Facebook and Twitter serve to remove the user from reality.”

Much the same effects as one’s drug of choice, we could well imagine.

Greenfield argued: ‘Social networking sites satisfy that basic human need to belong, as well as the ability to experience instant feedback and recognition from someone, somewhere, 24 hours a day.

But as this drug-user terminology becomes increasingly vogue, we may, instead, wonder if it marks something greater — not a necessarily a ‘problem,’ but the mark of adaptation, of social networking becoming, you guessed it, just another ‘basic human need,’ a much glorified bodily function. (Which could, at least, help explain why some of us have such a strong aversion to it).

As far back as Marshall McLuhan, some have considered the media (especially the new media) as a type of prostheses, an extension of the senses; and already we’ve reached a point when someone unable to blog or use Twitter shows the the signs not of withdrawal symptoms, but the attention-seeking arm flailing of the worst constipation.

After all, what other so-called addiction is safe to use ‘two hours a day’ out of physical necessity? Aren’t these restrictions, we could well say, a bit more like a metaphorical potty training..?

That said, we can hardly wait to see what Lilo will feel compelled to tweet next…