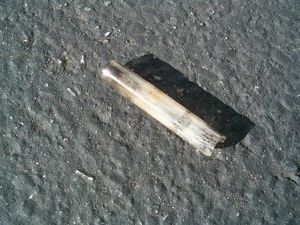 In times of imminent police intervention destroying the evidence is a hasty must do.

Eljuan Heath has been having a rough time of it lately. Why? Because trying to run a drug dealing racket requires a lot of practice, good will and of course a bit of good luck, the latter unfortunately escaping Mr Heath. That said, let’s all take out our crack pipe in sympathy of Mr Heath and listen to his woeful journey. I’ll take the first hit…

TheWeeklyVice: Tulsa, Oklahoma  – Eljuan Heath, a 41-year-old Tulsa man was jailed Sunday after he allegedly sold drugs in convenience store parking lot and then ate a crack pipe in an attempt to “get rid of evidence.”

According to Tulsa police, officers were called to a Quick Trip on Sheridan Rd. on a report that a man was dealing drugs in the parking lot.

Personally if we could advise any budding or current drug dealers, dealing in car parks or any other public venue in daylight is a big no no. The chances of getting caught go up immediately the minute one of your clients is seen stumbling like a maniac a few seconds after they have high fived you and quickly imbibed one of your stellar caches of contraband behind a beaten up Lincoln Town Car. If observation could be a guide, dealing from a non descript crack house or on a desolate country farm would markedly decrease the chances of you being singled out by uninvited guests.

When police arrived on the scene, Heath was inside the store attempting to hide beer he was allegedly stealing.

Investigators say he then chewed up and tried to swallow a glass crack pipe he was carrying. Officers had to physically restrain him before placing him under arrest.

As you can imagine the threat of imminent arrest and being shepherded back to prison (Mr Heath was on parole when he was apprehended) can send a man to desperate measures. So instead of taking out a pebble and sucking on it on the motor pipe Mr Heath did what he thought best- he tried to destroy the evidence and by destroying it in his mouth he must have factored that he would be getting a new and weirder high. Something you are suddenly disposed to do when a police squadron with 4 burly officers come barreling at you.

Six months prior to his arrest, Heath was released from prison after serving time for dealing cocaine. He was being monitored by an ankle device, but only had 18 days left of his probation before this arrest.

One day when Mr Heath finally makes it out of prison he will make sure he will have a good look at his ankle before walking into a seemingly vacant parking lot and sucking on all that good shit.

Driving a car while smoking crack with your kids in the back seat can never be a good thing.

The inconvenience of buying crack with monopoly money.