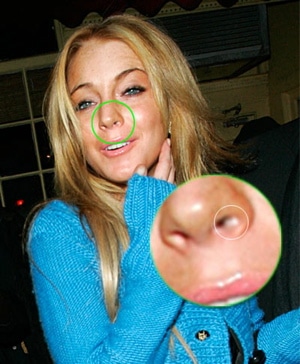 Hide your straws, our lovely Lilo’s been caught sneaking out of rehab and, once again, scored some of the sweet stuff in an attempt to get her Coke fix as, reportedly, her rehab facility prohibits television, caffeine and other basic necessities ‘luxuries.’

Calling it, “a tale so bizarre it is almost unbelievable,” (a bit over-dramatic considering this is Lilo and we demand expect the unexpected) Radar first reported that “Hollywood wild child attempted to flee the Betty Ford grounds to sneak into the nearby Eisenhower Medical Center, in a bid to buy a soda from a vending machine.” Given her innate instincts for media-whoring instincts it’s no surprise which brand she chose…

Sources say Lilo would’ve gotten away with it had it not been for her unnamed accomplice, a fellow patient who, upon the duo’s return, got her clothing stuck in a fence. The two were then forced to hand in their contraband to a Betty Ford volunteer riding around in a golf-cart. Yes we know, you probably wish you had you your own golf cart too…

But why go to such lengths as risking your designer blouse for something you’re not really even that addicted to; and what of the fact that Lilo really did decide to score some Coke, when she’s currently being treated for addiction to cocaine? Surely she knew what we’d all say if when we caught her in the act.

Isn’t she really just addicted to the media attention, the thundering force of its stupid repetition?

But you know the old adage- ‘coke- it adds life.’

Lilo gets a ‘get out of jail’ free card.

Lindsay Lohan has a new mugshot to be proud of.