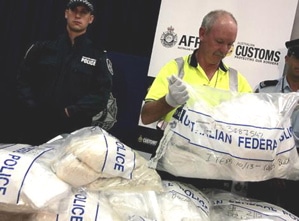 Where will the Aussies now find the good times?

In case you didn’t know a gram of coco pops in Australia easily goes for $400 AUD (don’t ask me how I know – i just do…blah!), that said, in the weeks to follow, the price of one gram of coco pops is about to go through the roof. Why? Blame the Americans…

Msnbc.com BRISBANE, Australia — A tip-off from U.S. authorities led to the seizure of more than 1,000 pounds of cocaine transported to Australia from South America, police said Thursday.

As you can imagine, that has probably unnerved a few possums scurrying in the back alleys and preferred VIP bathrooms of certain venues. But it gets better…

The catamaran was intercepted at sea by an Australian Customs and Border Protection boat on Wednesday and is being towed to Brisbane, Colvin said. He said two people on board — believed to be from Costa Rica and Germany — have been detained.

“If we want to dismantle organized crime we must attack the money flow, we must attack their income source,” O’Connor told reporters. “This is a great blow landed today, landed this week, by our law enforcement agencies.”

Then again for the price of 2 coco pops we suggest getting on a flight to LA where some pitiful soul will be waiting by the gate to sell you the good coco pops for just $40 (and with the AUD dollar trading on parity to the US that’s a deal).

Shouldn’t Australians be getting high in America like the rest of the world?