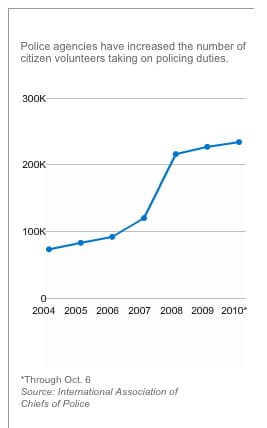 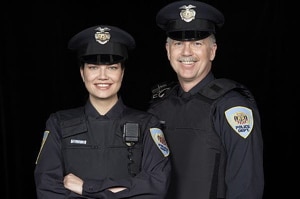 Also trending (even if not on Twitter) and said to be “driven by the economy,” is the conscripting of unpaid amateurs to do our policing as, opponents say, “cash strapped agencies are lowering standards and undermining professionalism in the ranks.” All of which has this blogger, wondering: hasn’t the same thing long been said of amateur publication of writing online, and aren’t these trends somewhat intertwined?

USA Today: “The positions — some paid and others volunteer — are transforming every-day citizens into crime-scene investigators, evidence gatherers and photographers…” No doubt, we could say, much like the blogosphere. But, also according to the report, by carefully calling the trend “striking” some (we could probably venture to say most) “analysts” seem to be suggesting that such amateurish police positions shouldn’t exist at all.

Doesn’t this belie the greater trend that enforcing the control system (the purpose of writing, originally) is increasingly becoming a leisurely activity? And hasn’t the whole point of writing long been to, well, impose your will, your very thoughts, on others’ straining eyes. To read another’s writing, even if only to criticize it, one must, in many ways, momentarily submit to the scrivener’s authorial… authority.

The inherent problem arises when “Teams of civilian volunteers help police canvass neighborhoods immediately after murders and other violent crimes…” Such amateurs are not only grossly underpaid, but also face a problem given that “[t]hey do not carry guns.” That is, they lack the most basic tools of the trade.

It goes almost without saying, that bloggers aren’t routinely paid very much (if anything); which should also be ‘striking’ considering that, writing, like policing — though a more or less a highly specialized job when done passably — is one almost anyone can fake his way though, whether or  not they’re armed with necessary tools.

Of course, if curiously, that doesn’t make these relatively unarmed forces, as a collective, any less effective… which should signal that, perhaps, the police corps is the next to be overcome, and perhaps improved, by a flood of eager amateurs even if the overall quality of the work inevitably suffers.

Which is more or less telling of control functions in the internet era: quality of authority has been replaced with sheer quantity of it.