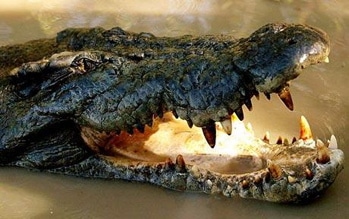 Should you be flying with a crocodile on board your flight?

Investigators are trying to put the picture together after a small airliner crashed in the Democratic Republic of Congo. The culprit? A crocodile smuggled on board that suddenly went loose…

UK Telegraph: A small airliner crashed into a house, killing a British pilot and 19 others after a crocodile smuggled into the aircraft in a sports bag escaped and started a panic.

The plane came down despite no apparent mechanical problems during an internal flight in the Democratic Republic of Congo.

It has now emerged that the crash was caused by the concealed reptile escaping and causing a stampede in the cabin, throwing the aircraft off-balance.

A stampede as you can imagine because the idea of being eaten alive by a crocodile is sometimes more terrifying than sitting in a plane wondering if this is the one plane in a million today that is going to crash.

A lone survivor recants the events:

The plane was on a routine flight from the capital, Kinshasa, to the regional airport at Bandundu when the incident unfolded, on August 25.

It crashed into a house just a few hundred feet from its destination. The occupants of the property were outside at the time.

According to the inquiry report and the testimony of the only survivor, the crash happened because of a panic sparked by the escape of a crocodile hidden in a sports bag.

One of the passengers had hidden the animal, which he planned to sell, in a big sports bag, from which the reptile escaped as the plane began its descent into Bandundu.

Which begs the immediate question, why wasn’t the crocodile caught during customary inspections before the plane took off and did the individual who brought the crocodile on board not think that it could potentially cause an outcry had it been discovered mid flight? Invariably the crocodile wanted to find out and to be sure it caused a very resilient outcry.

A report of the incident said: “The terrified air hostess hurried towards the cockpit, followed by the passengers.”

The plane was then sent off-balance “despite the desperate efforts of the pilot”, said the report.

And the crocodile? Did it survive the crash?

The crocodile survived the crash, only to be dispatched with a blow from a machete.

It was later revealed that the croc’s jaws had been bound tight all along.