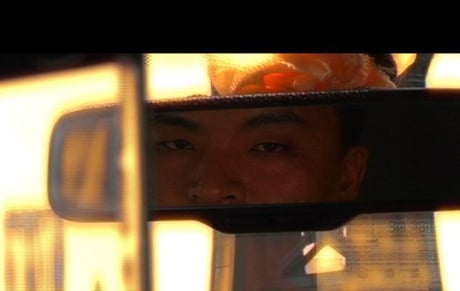 Not ‘fashionable’, hip, modern or cool, these agents of transport, safety and speed remain underrepresented. Yellow cabs illustrate New York City, in films-photos and songs. They tipify efficiency, chaos and escape, but not the ‘dream’ so well endorsed by a well-profiting fashion industry. They only exist to carry the dream faster and faster to their final destination, but are never the subject of the dream it self…

Artfully depicting the ethnic face of one of 4,000 drivers Baradaran interviewed, in the past six months, from behind a video lens’ record of images reflected by the rear view mirror, passengers paused- reflected- and introspected.

Having drawn attention to the third world—Amir’s project nonchalantly captures angles by which to understand the taxi driver. A slow, haunting meditative glimpse into the lives that exist ‘on the other side’-of the partition glass—viewers are drawn in, safely away from the ‘quick cuts’ of commercial programming. Capturing their eyes, in a series of clips—in a cinematographic vision, tinted orange and brown for the sake of appealing and captivating the viewer– we are propelled into a real world muddled with fantasy.

“What if Buddha were to drive a cab?” Baradaran poses. “He’d teach all to turn the carbide itself into the destination, not just the journey.”

Mechanistically re-inhabiting the days when there was no glass barrier, no separation—the video is comprised of shots of the driver’s gaze, often through stained plexiglass arrangements. It psychologically delves into a complicated exchange of race, class and politics.