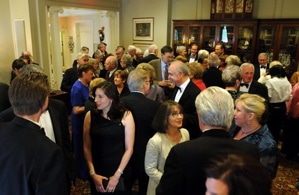 Will you cry me a river…?

Our favorite (there always our favorite when they get caught misbehaving) social squirrel Nydia Vega Reeves was arrested today for swindling the A- listers she coveted. Which begs the question would anyone really care if Nydia was from the Bronx and had only conned the boiler man? But maybe the real question is are rich people easier to con? Let’s find out…

Reeves — who also goes by the names Nydia Neubauer and Lucy George, and claims she grew up with Ralph Lauren and was friends with Denise Rich — was arrested in New Jersey, where she remains behind bars.

Ralph Lauren, Denise Rich and while we are at it Chancellor Von Bismark before he died in another century. Arrested in New Jersey? Does that qualify for the precincts of ‘society?’ Well if Danielle Staub hangs out there we can let that one slide…

“Nydia was arrested on Aug. 19 on charges of being a fugitive from justice. She is at the Monmouth County Correctional Institution on $100,000 bail,” a police spokesman told us.

She claimed she had inherited $100 million from her late husband’s estate, but repeatedly wrote rubber checks.

We reported earlier this year that Nydia, a regular at the Carlyle and Plaza Hotels, had written a series of bad checks and asked to borrow credit cards from people, including Michael Fredo (Tommy Hilfiger’s nephew) before disappearing.

To be honest Nydia, we never inherited $100 million (although I am adamantly petitioning Jose the boiler man in our building who got a pay raise recently…blah) but to be frank even we have contemplated writing a few rubber checks ourselves too. You know how it is with the astronomical price of Kool Aids at the Carlyle. And with the tip- fuggedabout it…

She was thrown out of the Alex Hotel in March after attempting to pay with a credit card in another name.

Isn’t that interesting. I was thrown out of the same hotel for accidentally spilling my iced Kool Aid on the bell boy. You’d think they’d understand us ‘social’ types can’t always be aware of mores and other inconvenient principles of etiquette that they pass around in Bible class.
Phyllis Keitlen, a fund-raiser for Denise Rich’s charity, claimed Nydia pledged $150,000 back in 2002, but, “When we tried to cash the check, she stopped payment . . . When I went after her, she gave me false wire transfer numbers twice . . . It was completely unfair what she had done to Denise, whose daughter died of leukemia.”

Phyllis, can I tell you if I had a spare $100 note I’d mail it over, but frankly the post office is under repairs. At least Nydia had the decency to feign concern. That’s something you have to pay dearly for in some parts of town.

She is also wanted by police in Southampton. A spokesman said: “We want to speak to Nydia on a series of charges, including grand larceny and theft.” Manhattan Assistant District Attorney Adrian Rosales is also investigating.

Southampton. Isn’t that a ritzy resort somewhere just behind the boiler room at the Carlyle? I bet Kool Aids cost a few pretty pennies there…

A source added: “Her schemes appear to go back many years and involve wealthy figures in New York, New Jersey, California and Aspen. Many people have been fooled.”

Nydia, I’ve got to hand it to you, you really get around. But you forget the most important thing dahling- ‘You were only ever fooling yourself.’
Anyway let’s hope the tear drops doing kamikaze tricks on my left sleeve let up in a half hour…