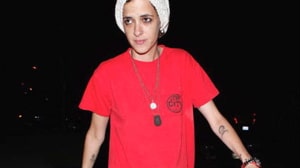 If seeing Sam Ronson sicking the dogs on her career-making high profile relationship with Lindsay “get me Britney’s people” Lohan wasn’t enough Ronson-related Lindsanity for one lifetime, Sammy Ronson’s supposedly brutal bulldog, Cadillac, is currently under investigation for killing a fluffy little puppy (aptly named Tiger) who, until yesterday was perfectly positioned by his owners for a long car in the lucrative world of dog-modeling. But just why we care, is another question altogether…

Ronson, ever the savvy celebrity, if a secondhand one (be honest, would we really care about her if not for Lindsay?), has taken to Twitter to express her some of sadness.

Ronson quoted in the Huffington Post: “There is absolutely nothing I can say that will alter one minute of today, nothing,” she wrote. “I feel incredibly sad and wish I could offer more than condolences, unfortunately there are no words to describe how sorry I am.”

Though a strange perversity, one could hardly call it a surprise that the media has flocked to pictures of Tiger, just as they have every other murdered or suicided fledgling actress or model in the history of photographic media who died before her time (can’t wait for the graphic tees and sorority dorm posters). Still, there is undeniably a bubbling, if not bloodthirsty, hostility brewing beneath all of this media madness.

Could it be that we’re (even unconsciously) looking for a metaphor here to connect to Lindsay in some attempt to make news about boring old Sam Ronson marketable?

The fatal attack happened Monday morning, TMZ reports. Sam was reportedly home sleeping when one of her friends let Cadillac out into her apartment building’s hallway and the bulldog attacked a neighbor’s 3-pound Maltese who was roaming the hall without a leash.

Does this not sound, if strangely, like a Lifetime Movie metaphor for Ronson’s previous — and notoriously —  stormy relationship with our dearest Lindsay? Is this not the final and violent death of that young, hot celebrity model we were all desperately hoping for, only displaced onto a hapless little puppy?

It seems as though since Ronson and Lindsay didn’t kill each other (as we were all hoping they would) this is what we’ve settled for.

What sells books, records, films and myths? The celebrity break up…