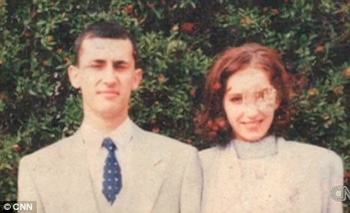 A ‘Polish neo-nazi skinhead couple’ asking to be called only Pawel and Ola have embraced their Jewish roots after discovering that the truth about their heritage “had been buried by their parents to escape persecution from first the Germans and then the Soviet-controlled post-war government.”

The story, immediately reminiscent of Dave Chapelle’s celebrated comedy skit involving a blind, black KKK leader, becomes, in this reader’s opinion, increasingly captivating as it degrades into a Kafkaesque parable on the nature of self-loathing, paradox, and, of course, insanity (our favorite).

CNN: Speaking in the synagogue where he now worships, Pawel said: “The mirror was a big problem. I couldn’t look at myself. I saw a Jew. I hated the person in the mirror then I grew accustomed to it, came to terms with it somehow.

“I came here to the rabbi and said, “listen, they are telling me I’m a Jew, I have this document in my hand, my mom and dad have said something. Who is this Jew and what is it? Help me because I am going to lose my mind otherwise.’”

Though the story is being sold as one of atonement and redemption, could this perhaps be a misinterpretation of the forces really at play?

Consider what the couple’s rabbi says should be the lesson: “I think…it says on a personal level, never write somebody off. Where they may be 10 years ago doesn’t have to be where they are today. And the human being has this unlimited capability of changing and sometimes even for the better.”

The twist in this story, if there is one, is appropriately ironic in nature, and calls into question the nature of appearances, that is, whether a change of status symbols really marks a change of character — much less whether we can change at all.

Reports state that now, “Pawel is studying to work in a slaughterhouse killing animals according to the Jewish Kosher requirement and Ola is working in the synagogue’s kitchen as a kosher supervisor.”

Pawel and Ola : showing us all limitless possibilities of change by going from violent Nazi sympathizers to… a butcher and a soup Nazi at a Kosher deli counter?

Am I the only one who sees the contradiction hidden just below the surface here? Are not Pawel and Ola taking the same pleasures as before, satisfying the same hidden urges, only displacing them by embracing more acceptable social positions?

Maybe the real lesson here is that even when we change some things don’t change so much.