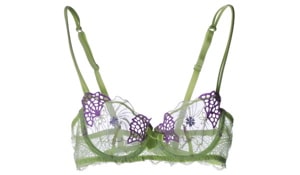 According to a NYT’s style article being flat chested is no longer to be demised, in fact it’s become the preferred aesthetic.

NYT’s: It is commonly assumed that small-chested women feel that nature’s lottery has left them coming up short. The parade of heaving bosoms in Victoria’s Secret catalogs not only suggests that bigger is better but also that supersizing with a push-up bra is universally desired.

Wrong, says Ellen Shing, the owner of Lula Lu, a Web site and boutique in San Mateo, Calif., that cater to AAA- to A-cup sizes. She says that while a small number of her customers come in looking for padded bras and tell her, “Make me as big as you can,” the majority “don’t want to supersize themselves.”

Is there something we are missing here? Is this a revolt from the commonly adulated form of big breasted women. A shifting of what male dominated industry folk permeate on our covers, billboards, movies and shampoo bottles? Then again, last time I looked there have always been flat chested women women dotting the landscape. So what gives..?

In the last three years, said Elisabeth Dale (formerly Squires), who wrote “Boobs: A Guide to Your Girls,” there has been “a huge surge in Web sites and online retailers that specialize in smaller bra sizes in a very empowering way,” like evesappleslingerie.com. “They are not about ‘Here’s how you stuff your bra,’ ” she added. “They are like, ‘The way you are is perfect, and here’s how I can help you.’ ”

These days, it’s not uncommon for women with modest busts to flaunt what little they’ve got with a deep V-neck cut or a halter top. And more small-chested ladies seem to be openly celebrating their look on Twitter, Facebook and various blogs.

A new blog, smallbustbigheart.com, has become a venue for these women, according to its author, to “gush about the lingerie and clothes that scream, ‘Can you handle me?’ not ‘Am I enough?’ ”

Celebrating one’s own merits as opposed to desiring openly espoused merits? Could it be we’re finally becoming more comfortable with whom we are or is this too just a new campaign to push sales on a segment of the market for a long time overlooked?

In recent years, as people’s weight has ballooned, breasts (mostly made up of fat) have only gotten larger, and commensurately bra cup sizes, too. K-cups now exist. Brandishing a tiny bosom may be a reaction to that trend.

A reaction that says you may be fat gorgeous, but these little pert pears are nice and firm. (I know you thought we were G rated…).

Small-breasted women have also begun to express their anger on the Internet when they suspect one of their brethren has decided to artificially augment what nature has given her. This year, pictures of a bikini-clad Kate Hudson — along with Keira Knightley a symbol of modest-breasted seductiveness to the A-cup population — surfaced showing what looked like modest implants.

Ladies you have been warned. Don’t stray too far from nature, the age of excess is definitely out. In fact it went out when your nifty bonus was nixed in the latest recession.

Personally this male author will always love all you women as you are. If only you believed it when we told you. Well, maybe now you do.