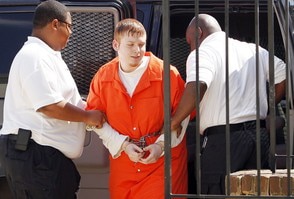 One young horrorcore rapper, Richard McCroskey, 21, who’d posted tracks about murder on his Myspace, pleaded guilty today to slaying his online girlfriend and three others in the rural town of Farmville Virginia one year ago.

Reports say that after a trip to a horrorcore music festival with his long distance lover, Emma Niedrbrock, 16, the two exchanged a number of text messages and “McCroskey became increasingly distraught about the relationship” which he had believed to be exclusive. Upset, “Late in the evening of Sept. 14, 2009, or early the next morning, McCroskey drank beer, smoked marijuana and might have taken painkillers” before videotaping himself taking a wood-splitting maul to the sleeping women at “around 3 a.m. on Sept. 15.”

But rather than simply discard this as yet another kooky murder isn’t it  more revealing to at least wonder how McCroskey, a young man with no violent history (save his kitschy rap-tunes), could be capable of so unfeeling a fit of rage? Could one even be so bold to argue that it was produced by the cultural landscape Mr McCroskey and by extension we found ourselves in?

Was McCroskey so desensitized by the pure repetition of his lyrics that he acted out his fantasizes not really thinking them possible? Or, maybe, had the character he’d created for himself as a performer begun to overtake the personal life he’d sought to keep separate from it?

In any case, the murders would appear to give his rap a grotesque brand of ‘street cred,’ while endowing an awful but intangible ‘realness’ to his lyrics, the likes of which has always added album sales and downloads to any rapper’s numbers.  Don’t these tunes, once they’ve taken on the all too contemporary form of a ‘real-life confession’ add to their curiousness as well as their cultural relevance?

And though the reports stating that McCroskey videotaped the attacks seem, at first, to add to his callousness, we may well wonder if the idea of videotaping such a thing could be a sign of something more difficult to face for fear of encountering, something far more symbolic, brooding, and affecting?

What if the only way McCroskey could ever come believe he’d done the deed was if he were able to watch it over again, perhaps aided by the sure and steady repetition of it like that of a rap beat? If, as Slavoj Zizek once famously argued, ‘the fundamental paradox of the passion for the real” is that it “culminates in its apparent opposite, in a theatrical spectacle” does it not seem that this murder was McCroskey’s final attempt to reconcile the two conflicting parts of his personality and root his consciousness somewhere firmly with the video aid of spectacular and repeatable objective reality?

From this point, we could wonder if this this videotaping is significant of something greater:  the horrifyingly absurd and often revolting lengths to which a contemporary American will go to ‘prove’ his ‘realness’ before an audience (real or imagined) watching at the other end of a camera.