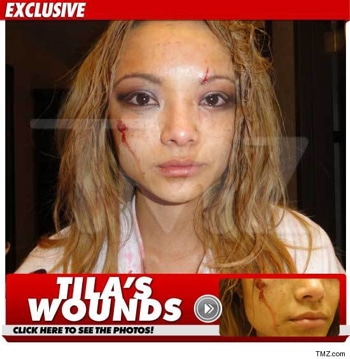 When the fans don’t turn out to be fans after all.

Things haven’t ended so well for fame whore Tia Tequila this weekend with the revelation by TMZ– fame whore bloggers that according to TIA she was beaten at the mercy of the audience. Put on your boxing gloves and follow us…

TMZ: According to Tila, she took the stage at the Gathering of the Juggalos in Illinois — a concert featuring such acts as Insane Clown Posse and Kottonmouth Kings.

Tila gave TMZ a very detailed account of what happened, saying: “I went onstage and immediately, before I even got on stage, DUDES were throwing HUGE STONE ROCKS in my face, beer bottles that slit my eye open, almost burnt my hair on fire cuz they threw fire crackers on stage, and they even took the sh*t out of the port-0-potty and threw sh*t and piss at me when I was onstage.”

Part of us can imagine half of America cheering with joy, throwing their own beer bottles at the TV screen and the other half running for their lives with the knowledge that being a fame whore is perhaps starting to wear thin on the public consciousness.

She went on to say: “These people were trying to kill me.  So then after the last blow to my head with the firecracker they threw at me exploded, my bodygaurd and the other security grabbed me and ran as fast as they could to the shitty trailor.  Since their security SUCKS, the 2 thousand people ran after us, trying to kill me.

Life has suddenly gotten very tricky for Tia and for once she may not want to announce every detail of her existence to a public that has for all intensive purposes become insensitive to the over saturation of full time media whore that goes by Tia Tequila.