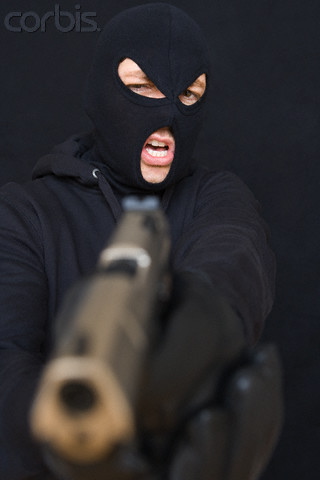 Like a scene straight out of an action movie, four armed criminals, dressed head to toe in black, overpowered two workers at a St. Louis ATM servicing business, ATM Solutions, Inc., on Monday, and then, adding insult to injury, proceeded to use the service’s own armored van to haul, what is estimated at, millions of dollars in the heist. Police captain Michael Caruso said the most alarming part of the incident was how well-orchestrated the plot was, but that it is, however, important to note, that the thieves had no intention of hurting the workers, they just wanted the money.

USA TODAY: The robbers subdued the workers with duct tape and locked them inside the vault after the raid, Caruso said. Some media outlets reported that the robbers made off with $4 million and $5 million. Caruso said he had no immediate details of how much was taken.

The thieves waited for the first employee to come to work, and then bum rushed, disarmed and subdued him, before the other employee arrived to work. Authorities say this means that those involved knew it took two separate access codes, keyed in by two separate employees, to open the vault. Once inside, they bound the employees with duct tape, loaded the cash into containers and fled, leaving the victims inside the vault.

Although Caruso says that it’s a “total unknown” as to whether or not the heist involved any current or previous employees of ATM Solutions, with all of the knowledge that the thieves had of how to commit their perfect crime, it certainly sounds like an inside job. The FBI is now involved and police are hoping that video surveillance will catch the bandits.

Of course it’s worth noting, despite all the millions of dollars missing. No one was hurt.