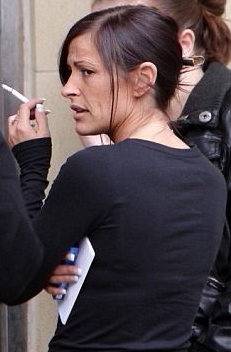 The arguments people are having in the back of taxi cabs…

This is why I don’t ever drink and drive. Not that either couple were driving while they were digesting their drinks in the back of a taxi. Well to be precise Ms Hargreaves was sitting in the back and the aggrieved – Gavin Taylor the one with the 3 inch stiletto going through his left eye was sitting in the front. The drinks and bloody spills as they come….

Daily Mirror. Co.Uk:A drunk woman rammed her stiletto heel through her boyfriend’s eye and into his brain during an argument in a taxi, a jury was told today.

Staci Hargreaves, 33, was in the back of a cab when she kicked Gavin Taylor, 28, after he turned round in the front seat.

Pleasant enough one wonders, except for the heel of the shoe piercing Mr Taylor’s eye. So what do you think happened next. Grab your eye patch and follow us…

Taxi driver Mohammed Akbar told the jury that he noticed his front seat passenger turn round after he had been arguing with Hargreaves.

He said he saw a foot coming between the two seats and the man in the front then shouting ‘My eye, my eye’.

Mr Akbar said he drove his taxi to the nearest police station and sounded his horn until officers came out to help.

Hargreaves sat in the dock today with a security officer.

How sweet that Ms Staci Hargreaves has arrived to court accompanied by a security officer. So reassuring. What would Ms Hargreaves be possibly afraid of?

Mr Taylor began coughing up blood and slumped into unconsciousness following the attack in Huddersfield, the court heard.

He was taken to hospital where his condition initially deteriorated before he eventually made a ‘surprising’ recovery, the jury heard.

If you mean not turning up dead, yes we’d call that a surprising recovery too. What we wonder is what Ms Hargreaves thinks of all of this?

Isn’t lovely how some couples get on and then again how ugly it is when some couples just can’t get along. So much for drink driving…