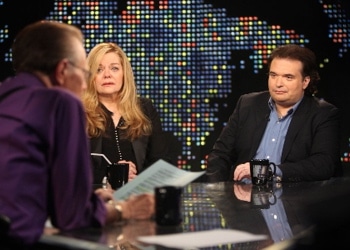 When the cat’s away, the mom will play; or so Sharon Murphy, mother of deceased actress Brittany Murphy, is accusing the LA Coroner’s office of insinuating in their report.

Although there was always rational explanation to explain away the obscurities in the death of Brittany Murphy, and soon after, her husband Simon Monjack; we’re not sure how Brittany’s mother is going to handle this one.  She submitted a statement to her defense, but that release only explains one thing, unfortunately. Either her, or whoever her nitwit PR person is, does not know how to spell.

TMZ: In a statement, Sharon says, “I am very disturbed that the L.A. Coroners [sic] office continues to release things to the media that are misleading.”

She continues, “The TMZ story with it’s [sic] salacious headline suggesting that my prescious [sic] son-in-law Simon and I slept in bed together, infering [sic] sexual contact is journalism at its lowest.” Sharon also denies there were medications in the house prescribed to a “Sharon Monjack,” as the Coroner’s report states.

The only thing sic-er than that statement, is what she is, as she proclaims, is being exploited by the LA Coroner’s Office:

New York Daily News: The report said the investigator and the unnamed source — Sharon — were in her daughter and the actress’ husband Simon Monjack’s bedroom in Hollywood Hills. The mother pointed to one side of Monjack’s bed and called it “her side of the room.”

The mother also said prescriptions on a nightstand, which had the names Sharon Murphy and Sharon Monjack, were hers.

The response from the Coroner’s Office was, “the report speaks for itself.” If that’s the case, we’re going to let our wild imaginations run with this one for while; after all, we’re tabloid hacks, isn’t that what we’re supposed to do?