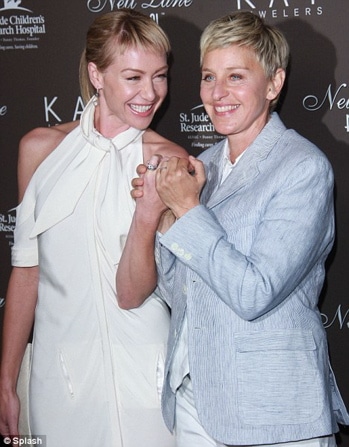 Portia De Rossi is no longer. She is now Portia DeGeneres.  Although Portia and her wife, talk show personality extraordinaire Ellen, were legally married in 2008; it was not until now that her petition was granted to change her last name. Almost.

Daily Mail UK: Rossi’s name change is expected to be made official after a court hearing in September.

So close, but yet so far. You’ve got to wonder, what is harder: waiting the first two years? Or waiting those final two weeks?

It will be the second time she has changed her name after she was born Amanda Lee Rogers.

We’re really glad that Portia changed the Amanda Lee Rogers; I’ve known a few girls with names very close to that throughout my life; and let me say, none of them were near as classy as Portia.

The Australian-born star legally changed her name to Portia De Rossi when she was 15, taking Portia from a character in The Merchant of Venice and De Rossi because she wanted an exotic European name.

Nicely done, Portia. We have to admire you for your choice in names. And Ellen, she’s great. A fine dancer and, no other woman wears a pair of pants quite like her.

Ellen and Portia’s union has been an interesting juxtaposition of the past and the future of what it means to be married, and who is allowed to do so. Although the women were allowed to marry in 2008; Portia still had to wait for two years until a petition was finally granted; and it’s still not quite official.

Isn’t it time to stop fighting? They’re ¾ of the way there, it’s time to let two people in love, no matter who they chose to marry, be happy and complete.