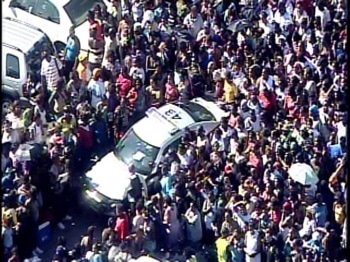 More than thirty thousand people have gathered, most of whom have been standing in line for two days, outside a metro-Atlanta shopping mall, hoping (yes not necessarily receiving, just hoping) of being placed on a waiting list for federally funded housing in East Point, Georgia.  Fulton County, where East Point is located, is suffering from an unemployment rate of 10.8% percent, 1.3% higher than the national average.

According to Atlanta television station 11Alive, the line for the Section 8 housing vouchers formed two days ago, and grew to 30 000 people by Tuesday night.  Although the housing officials told the crowd that the line was unnecessary, and that everyone would receive an application, it has not stopped residents in need from continuing to wait, in what is beginning to be, very dangerous conditions.

Huffington Post: Fights broke out, children were reportedly trampled, and police had to stop the crowd from storming a cafe being used by the East Point Housing Authority in East Point, Ga, reports the Atlanta Journal-Constitution.

Frustration and confusion have also ensued.

People became frustrated when officials, feeling overwhelmed, did not open the cafe doors at 9 a.m., as they had planned, reports CBS Atlanta. Those waiting in line were told by officials to move from one location to another before police and housing officials handed out applications.

Wednesday morning, the crowd had grown large enough that the East Point police department began patrolling the area in riot gear.  Medical personnel are also on the scene, aiding many waiting in line who are suffering from heat exhaustion in Atlanta’s blistering summer heat.

Fighting, tramplings, heat exhaustion, the fear of riots; all for a housing application. If you want to know the frustration, and desperation, of Americans over government spending, bailouts, war, and all other frivolous expenditures; today is the day.

Look no farther than the desperation of those waiting for a little bit of hope in East Point, Georgia.