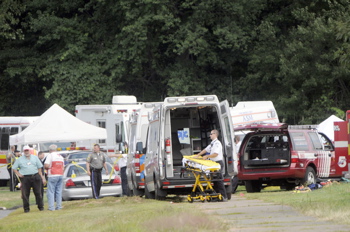 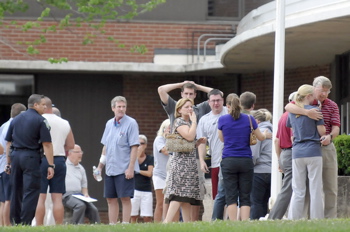 So much for a peaceful Tuesday summer day…It’s been gore and blaze this morning in Manchester, Connecticut. The final culmination of a man seemingly rankled with built in hostility and resentment. His legacy will be felt for time to come. What then ultimately triggered this horrific series of events? Oh the bloodshed…

NY Post: A gunman who killed eight people and himself at a family-owned beer and wine wholesaler in Manchester, Conn., may have been motivated by racial discrimination, the Hartford Courant reported Tuesday.

Omar S. Thornton, 34, reportedly entered Hartford Distributors and fired at employees with a .223 caliber semiautomatic rifle before turning the gun on himself.

Thornton, who is black, had complained about being racially harassed at work, the Hartford Courant reported, citing a woman whose daughter dated Thornton for eight years. Joanne Hannah said her daughter told her that Thornton complained about the treatment to his superiors, but they did nothing about it.

They did nothing about it. But of course Omar did. Because this is what you do when it’s all too much. Right?

According to John Hollis, a Teamsters union official, Thornton was a driver at the company who was hired approximately one year ago and was expected to face a disciplinary hearing on Tuesday.

A disciplinary hearing? What was he being disciplined for? Or were there others that Omar felt ought to be more deserving of some of their own disciplining?

What happens then when we take disciplining in to our own hands?

What will happen when family members pick up that phone to receive the horrific news of their loved ones..?