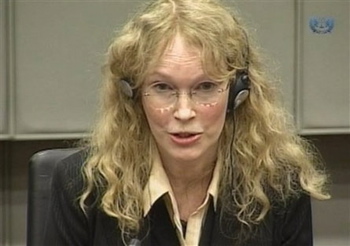 Today, Farrow testified to the contrary of Naomi’s story last week,  in which Naomi said she had no knowledge of Charles Taylor, and that she was unaware that her “dirty pebbles” were blood diamonds.

Farrow’s account is corroborated by Naomi’s jilted ex-agent Carole White, who is embroiled in another legal battle with Campbell, citing unpaid royalties of up to 600 000 pounds.

Hopefully, Naomi can soon put all this drama behind her; we’d hate to see girlfriend pitch another fit and end up picking up trash in an orange jumpsuit again. After all her highness has a lot more to worry about than war crimes, mass mutilation, smashed phones, missing royalties and ‘dirty pebbles’ showing up at the dead of night… Hopefully Mia Farrow and them other wenches will understand she has to tend to some real concerns – like sipping sweet nectar champagne in Sardinia amongst billionaire lovers and friends.