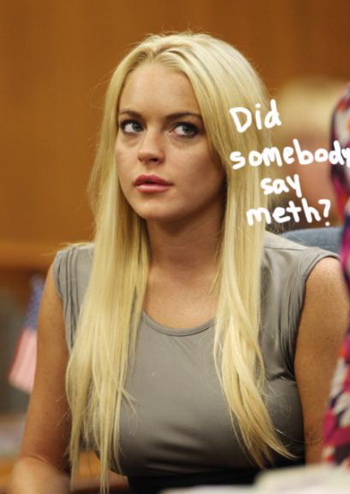 The things Lilo likes to play with.

We don’t know whether to laugh, cry, yawn or even gently nod our head – ‘It’s only Lilo – she’ll be right. Just pass her the crack pipe. Sorry, we meant her meth pipe.’

In today’s news, reports are circulating, that America’s preferred media whore who was released early this Monday morning ( presumably due to over crowding- yippee) may also now be addicted to crystal meth and may also need treatment for bipolar symptoms (do you really need a medical degree to figure that out?).

Released from her favorite 5 star hotel – the Lynwood Correctional Facility (amazing how fast 14 and half days goes) and straight to her favorite 5 star resort – the UCLA Medical Center for an extended spell, media celebrity scumbag Perez Hilton (who also needs to check into a loony bin we think) reports the following:

Perez Hilton: Once Lindsay gets out of jail and heads to rehab, sources are saying that she will be treated for addiction to methamphethamine and bipolar disorder.

Methamphetamine and opiates are her “drugs of choice,” according to the source.

We knew Lindsay was a coke head, pill popper, and a boozer, but being a tweaker too???

Not to be outdone our other favorite media gossip site NY Post had this to say:

NY Post: Lohan was apparently able to avoid the throngs of paparazzi staked outside the jail by not exiting through the front entryway.

She was supposed to get 24 hours to spend with family and friends after being released from jail and before having to report to rehab.

But Judge Marsha Revel put the end to that plan last week and ordered her straight to rehab.

She’ll undergo the rehab at UCLA Medical Center, where her doctors originally wanted to her to go, the gossip Web site TMZ said early this morning, adding she won’t be held in the psych ward.

E! Online reported that upon her release, Lohan was ushered to rehab in an unmarked van.

Unmarked van? Somehow we’re tempted to weep, reach out and write a long letter of endearment to Lilo, tell her how much we want to drop by and make her hot cocoa, braid her hair, show her pictures of our own favorite devices of self mutilation but then the idea of having to share Lilo with all her new soon to be friends at rehab stops us.

One day, Lilo will walk down Malibu boulevard, clean as a whistle, once Hollywood completely bites her apart, where she will be free to retain herself without a single photographer or journalist in sight.