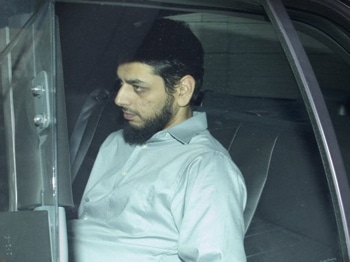 One can perhaps hardly be surprised that former Canadian Idol contest Khuram Sher, was eventually rounded up for terror related activities: after all, anyone who still thinks Avril Lavigne is culturally relevant (much less worth listening to sung a cappella) should be counted as an imminent (if not immanent) threat to national security.

NationalPost: Crown attorney Dave McKercher gave a synopsis of the allegations against Dr. Sher to his lawyer, Anser Farooq, but the allegations were not read in open court.

Mr. Farooq said Dr. Sher was charged with participating and facilitating a terrorist activity, which has a maximum 10-year-sentence and conspiracy, which he said was “hard to prosecute.”

Sher’s case marks a real first for us in the tabloid biz, in that it combines perhaps the two most favored hate objects of the American public: X-country Idol contestants and Muslim TerroristsPlayboy ranking Penn State among the other party schools, I refuse to rate the amateurs alongside the professionals). (celebrities, here, are not counted as, like

Why would Sher – assuming, if only for a moment, he did indeed conspire to induce terror, aside, of course, from that already inspired by his singing and dancing (those awkward robot moves alone should be enough to send anyone into seizures) –  subject himself such an obviously self-destructive TV appearance? Isn’t the whole point of being in a terrorist sleeper cell to blend in, to ensure nobody suspects you?

Is Sher simply addicted, like so many in our media society, to prostrating himself before idealized abstractions of of power both worldly and heavenly so that the most grievous of judgments can be serially cast down upon him (building up, that is, to that final one), all in order to overcome them by virtue of willfully submitting to them? This is the very essence of masochism…

Surely Sher didn’t think he had the natural abilities to advance in this competition: he’s not even horrendous enough to be campy, just stuck in that mire of a middle ground somewhere between averageness and idiocy so many untalented and struggling artists find themselves eternally condemned to (pure Pants on the Ground-like genius it is not).

Unless, perhaps, he’d planned riding the death-screams of public adoration straight to the top only to make his eventual firey betrayal all the more affecting. Could he be even more delusional than any of us could have possibly suspected?

I wonder if, like other delusional foreign ambassadors of the avant-garde, such as (most notably) the German composer Karlheinz Stockhausen, Sher — who states his acting among his interests after singing — has begun to see terror as a type of (musical) theater: a medium of modern art forming inside the continually blurring lines between war/disaster-movie fantasy and ‘real-life’ reality continually bombarding our culture and society through the same computer screens, and often at the same time.

Stockhausen’s infamous quote on 9/11: “Characters can bring about in act what we in music cannot dream of – that people practice madly for ten years, completely fanatically for a concert, and then die. That is the greatest work of art for the whole cosmos.”

Is Khuram Sher a character in a terrorist escapade? It appears, unfortunately, he may fancy himself one, and even worse: the media does as well.