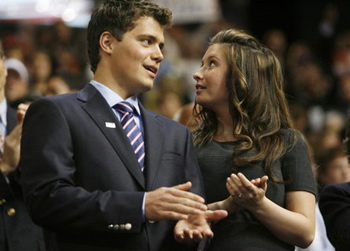 The tears are gushing off the back of my elbow as I write this- but it’s true, America’s preferred media whore couple have officially called it quits. Which only means one thing, I’ll have to put my ” I love Alaska everyday,” t- shirt back in the basement. The horror as reported by our favorite foul mouth- Michael K of D listed (whom I presume is also burying his ‘I love Alaska everyday,’ t- shirt in the backyard). Oh the woe…

D listed: A few weeks ago, Bristol Palin and Levi Johnston on the cover of UsWeekly. While Bristol and Levi counted their cash on the table, they said something about how they were getting married soon…blah…barf…blah. But cancel the taxidermy wedding cake topper, because Bristol has run off to People to tell them that the wedding is dead! Bristol has quit Levi, because she says he’s more interested in humping the spotlight than humping on her.
conjured up a wave of eye rolls by declaring their recycled love for each other.

Humping the spotlight? Levi? I had no idea. No one had no idea. Not even the people at People mag who wrote that big fat check to Bristol and Levi. Why would Levi want to be a full time media whore? Surely he must have known mama Palin would give him a job milking the cows in the pastures of the White House when she finally got there in 2012. Oh god, who will milk Mildred and Tony the White house cows now?

Bristol said, “It’s over. I broke up with him. The final straw was him flying to Hollywood for what he told me was to see some hunting show but come to find out it was that music video mocking my family. He’s just obsessed with the limelight and I got played.

Through this whole experience I know I need a man who’s going to be completely honest with me and someone who loves me and Tripp and wants to be with him all the time. I also want someone who has religious beliefs and a good family.”

Played? We all got played. Don’t worry Bristol, we’ll slaughter the cows moseying in our next door neighbor’s front lawn and say a sacrificial prayer for you. Oh the wretched tears…

Bristol Palin and Levi Johnston are back together again.