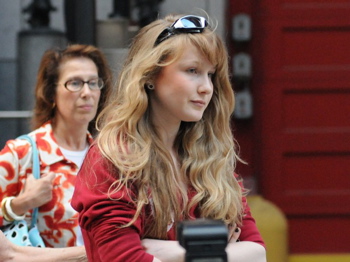 Tears, shame and the media circus.

The media world is on fire today, relieved that Caroline Guiliani got caught shoplifting at Sephora’s on the Upper East side on a slow summer August day. After all what journalist doesn’t enjoy the tawdry details of a new humiliating episode in the on going upside down saga called “My name is Rudolph Guiliani, I’m the much maligned ex mayor of New York City, miserably failed presidential candidate, despised ex husband of Donna Hanover and these are my kids who happen to also despise me and have now turned into petty criminals. Wont you please sit down and join us for tea and crumpets?”

Dnainfo.com: UPPER EAST SIDE — Former Mayor Rudy Guilani’s daughter was released from police custody Wednesday evening after her arrest earlier in the day for shoplifting at an Upper East Side Sephora, police said.

Caroline Giuliani, 20, allegedly took$100 worth of makeup from the Sephora located at 144 E. 86th St. near Lexington Avenue, police said.

The incident occurred at roughly 3:30 p.m. when Giuliani was apparently spotted on the store’s surveillance video, the NYPD said.

Uh-oh, sounds like a little rogue is now amongst us. Can someone send us a crate of rocks so we can be the first ones to cast a stone? But before we start throwing the stones (at least little Caroline will have her stolen make up to cover the bruises right?) let’s all find out what happened when Sephora’s realized who it was who actually did the little boo boo and what the police did anyway?

The store declined to press charges when they learned the identity of the alleged thief, but NYPD arrested her at the store anyway, sources said.

Giuliani was led from the store red-faced and in handcuffs by four police officers, witnesses told DNAinfo.

Gees, the store probably wanted to run back and fetch another few hundred dollars worth of products to put in little Caroline’s knickers- “Mayor Rudy’s little girl?- shit, we don’t want him coming and closing us down too, please Caroline help yourself to a few more stolen items.”

But thankfully we live in a very upstanding country and the police officers with tears in their eyes (all 4 of them bitches) demanded little Caroline(who happens to be a Harvard student, oh well so much for the idea kids from ivy league schools are peaches and cream) serve her patriotic duty and follow them to the county jail. After all if Lilo can serve jail, then even an ex mayor’s little girl can get used to the baloney sandwiches (don’t ask us how we know) waiting for her downtown.

Police took the Harvard University student to the 19th Precinct for processing, sources said. She was released with her lawyer about 7:15 p.m. Wednesday evening.

Giuliani was given a Desk Appearance Ticket (DAT) issued by the NYPD, which is typical for misdemeanor charges.

The DAT states that she will have to make a court appearance on Aug. 31  on charges including petit larceny and criminal possession of stolen property.

By the time of her appearance, the DA’s office expects to have decided whether they will prosecute Giuliani on those charges, they said.

In other words be prepared to spend the next 4 weeks watching CNN taking national polls to see  if Rudy’s little girl deserves to hit the slammer. Personally we don’t think it even matters, because we’ve already come to the conclusion this fall- Caroline Guilani is going to be Sephora’s new cover model and a New York Times best selling author. Rudy it seems has a lot to be proud of after all.

Rudy Guiliani is thinking out aloud whether you might vote for him.

Why wont toast (prick) of the Hamptons, RUDI GUILIANI just call it a day?