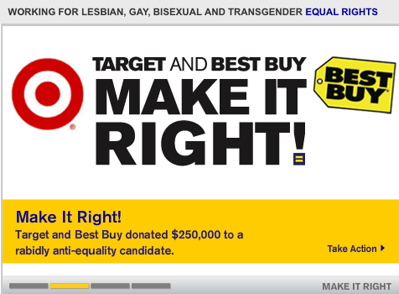 You may not know much about lobbying and how corporates decide who to give their spare cash to, but that may be due to the fact that there are a lot of competing and conflicting pieces of information floating in the media. What may seem initially perverse and down right hostile may in fact may make a lot of sense.

Enter the current fracas between two of the nations biggest retailers- Best Buy and Target and that of the Human Rights campaign which has recently sought to vilify these two concerns. In this provocative piece award winning journalist Mikey Rox challenges what the Human rights campaign (Who works for lesbian, gay, bisexual and transgender equal rights by lobbying the federal government, educating the public, participating in election campaign) is actually up to. It’ll make you wonder what’s really at stake and whether corporates are pro liberty and humanity, an important consideration to bear in mind next time you go shopping for that item that in most cases you really have no idea how it came to be.- the Editor- Scallywag.

Somebody call Tom Cruise. The Human Rights Campaign is on a Mission: Impossible.

Its goal? To convince two of the world’s largest corporations, Target and Best Buy, to donate a combined quarter-million dollars to pro-equality candidates in Minnesota after the retail behemoths contributed an equal amount to MN Forward, a right-wing political action committee that backs anti-equality gubernatorial candidate Tom Emmer.

In the past week, pressure has mounted against the consumer juggernauts as the HRC continues to lead a charge intended to shame both outlets into giving funds to politicians who work on behalf of equal rights. As if that’s supposed to “right” the “wrong.”

Of course, I’m not surprised that the HRC would suggest a dollar-for-dollar approach to call off the queer uprising. Especially since the HRC’s own agenda is fueled by greed and crispy greenbacks. Yep, you read it right. HRC president Joe Solmonese and his holier-than-though “activists” are as shady as those at whom they shake their fingers. And they should be ashamed of themselves.

While HRC proper is a 501(c)(4) group – a distinction that allows it to lobby on Capitol Hill but keep the identities of its donors private – the HRC Foundation, the “charitable” arm of the HRC isn’t exactly a model of efficiency or full disclosure.

Consider, for instance, that the Foundation spends nearly 30% of its net income on administrative and fund raising expenses combined, according to Charity Navigator, the most-utilized and trusted evaluator of charities. What does that mean? For starters, it means that $1.3 million dollars is spent to pay inflated salaries, while another $1.3 million is spent on the junk mail that carries your “free” sticker.

What’s even more suspect is that there’s no reported compensation for Betsy Pursell, HRC vice president of public education and outreach, on CharityNavigator.com, whereas like minded equal-rights organizations, such as the Gay & Lesbian Leadership Institute and the Gay & Lesbian Alliance Against Defamation (GLAAD), dutifully disclose how much they pay their head honchos. 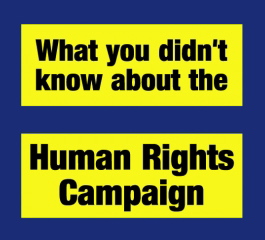