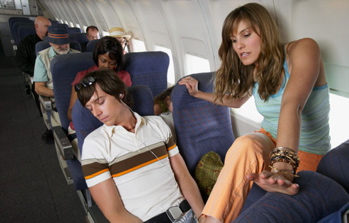 Southwest Airlines, who infamously kicked off actor/director Kevin Smith for being too heavy earlier this year, reversed roles, and deplaned a Sacramento woman en route to Las Vegas to seat an obese teenager on the early evening flight.

Examiner: The 5-foot-4, 110-pound woman who had already boarded the flight and taken her seat after standing-by to get onto the flight in the first place, was abruptly deplaned so that a very large, late arriving 14-year-old passenger could travel on the early evening flight to Las Vegas. Needless to say, the woman who is also a frequent business traveler was to put it mildly, stunned.

What is most absurd about this whole situation, is the passenger that the woman had to deplane for was a fourteen year old. A fourteen year old? How big can a kid in middle school possibly be?  If he takes up two seats on an airplane at his age, imagine in ten years what size this kid will be.

Southwest spokeswoman Marilee McInnis agreed, saying that the awkward situation should have been handled better. She said that Southwest intends to apologize to the woman, who also says that she was berated by airline staff when she challenged their decision to take her off of the flight. She did take the airline’s next flight to Las Vegas a short time later.

What could they possibly berate her for? The fact that she was ¼ of the size of her fellow passenger?  Or because she didn’t believe that was fair, especially when the teenager had only paid for one seat, yet ended up with both?

Something doesn’t seem quite right that you’re charged an exorbitant fee for a bag that weighs too much, but if your ass lops over onto the seat beside you, you’ll  get an extra seat for free.