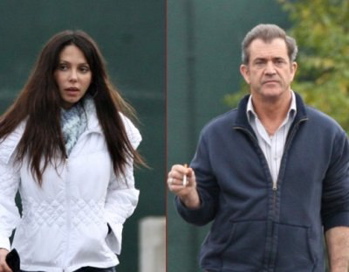 Ahh the drama. If only Mel could have been this dramatic all his life, we’re sure there’d be a learjet parked in his garage not to mention a football field stacked with $100 bills from here to eternity. The latest drama courtesy of the ‘Mel, I don’t know how my life suddenly unraveled,’ show.

Huffington Post and Radar :Radar has released another taped segment of Mel Gibson rant, and in this one he calls Oksana “b*tch, c*nt, whore, gold digger.” He also reveals he is broke, which may have pushed him completely over the edge.

“I don’t have any f*cking money!” Mel screams at Oksana. “F*ckin’ user! You f*ckin’ used me! I will never forgive you!”

Broke, because Oksana woke up one night and lassoed Mel in his jacuzzi and told him if he didn’t cough up money he would never see her backside again, broke because she forced Mel to run to the ATM machine and pull out of those wads of $20 bills to finance her luxurious existence, broke because one starry night Mel had a vision if he kept pumping money at Oksana she would become the babushka he always craved…

He says he spent more than $5 million on Oksana and had to sell his Lakers box and paintings to support her and pay his ex-wife’s divorce settlement.

No Mel I will not say thank you, you never once sent me a single dollar, not even after I wrote you a painful letter back in 1996 extolling how much you once meant to me, how you inspired me to become a tabloid writer, a junkie of your life and a devout follower of all your rants. No Mel, not a single thank you, you didn’t so much as spit in my direction!

“I will never forgive you for what you’ve done to me you f*cking bitch!” Mel yells.

“You ruined my life! And you didn’t give me a penny,” says Oksana.

2010 does not look like a good year for Mel Gibson.

Did Mel Gibson knock his girlfriend’s teeth out?