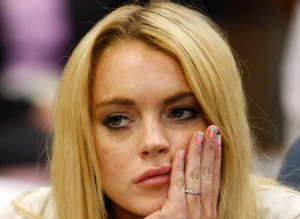 No more coco pops for the time being…

Oh dear what a girl will do to avoid jail time. In lieu of her impending stay at the local clinker (crunch time is Jul 20) Lilo today took the bold move of checking herself into the rehab house. Word hasn’t been released whether this wonderful ‘now you see me’ and ‘now you don’t see me’ trick will spare Lilo from the gallows, but anxious paparazzi waited outside Lilo’s gates as her ex Sam Ronson, her mom and sister assisted Lilo in moving her gear into a car bound for rehab hide away…

Her mom, sister and ex-girlfriend Sam Ronson visited her later in the day and her assistant Eleanor was seen unloading bags of art supplies from a car at the facility.

The rehab facility, Pickford Lofts, was started by OJ Simpson attorney Robert Shapiro after his son died of a drug overdose in 2005. Lindsay has hired Shapiro to represent her, TMZ reports, and they hope that her jail sentence will be reduced or eliminated now that she has entered rehab.

Lindsay is supposed to turn herself in Tuesday to begin her jail time. She was originally sentenced to 90 days of rehab after 90 days in jail.

Of course the obvious question is, is this a little too much too late in the day and would such a move have saved Lilo a long time ago had she tended to her addictions a whiles back? Whether the move will preempt the courts from moving Lilo to the clinker come Tuesday remains to be seen, but if we had a choice between the cold reality of the penal system as opposed to the fluffy pink walls of Lilo’s preferred new holiday home, we too would be running with open arms to the loony tunes episode called- “Wow- I’ve always wanted to check into the rehab half way house, can someone please point out my bunker.”

Aren’t you glad you’re name isn’t Linsay Lohan? Anyway, good to see this young lady finally facing up to some horri realities of her life, if only we could all do the same.

ps- Lilo, what bunker bed did they give you, one at least by the window right…?

Did Lilo’s lawyer really quit or did Lilo fire her?