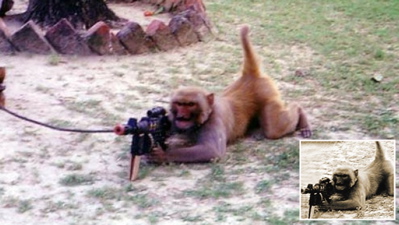 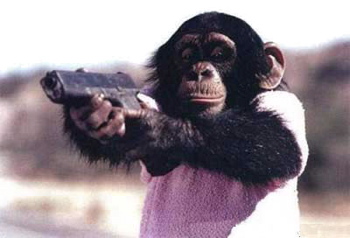 A sigh of relief.

We’d been worrying about this all weekend, ever since a Chinese report came out tooting that monkeys were being trained to shoot people but thankfully a news report today has dampened our fears that terrorist monkeys would soon be taking over downtown with AK rifles and machine guns.

News.com.au: IN a torrid week for the US military, here’s some good news – you won’t be fighting monkeys in Afghanistan.

Two weeks ago, the Chinese People’s Daily Online reported – citing a “British press agency” – that the Taliban was been training monkeys to shoot at US troops.

Armed with “Kalashnikovs, Bren machine-guns and trench mortars”, the macaques and baboons are being taught to recognise and fire upon anyone wearing a US military uniform.

Taliban monkeys? Could you imagine? We’d never be able to look at a monkey ever again and want to kiss him. But now thankfully we can….

Many media outlets immediately tried to discredit the story, claiming the photos circulating on the web were “Photoshopped” and showed the baboons wielding “toy guns”.

Stripes.com found that the original photo of machine-gun wielding baboon that surfaced following the People’s Daily scoop had it on a leash with an orange cork in the barrel.

Toy guns? Smoking barrels? Doesn’t sound so innocent to us, leash or no leash.

“They can be trained to do things like turn off lights and open faucets and so on, but eventually that breaks down,” psychologist and professor emeritus at the University of California, William Mason, said

“If we’re talking about animals going out into the field or a fortress with an AK-47 or whatever, it seems very, very implausible.

“To give a monkey a complex device like a rifle and say ‘We’re going to train it to become a soldier’ is purely fantastical.”

So there you have it – monkeys can’t be trained to shoot people. End of story, believe what you will at your own risk.

Personally we don’t mind if a monkey can be trained to take the occasional picture, but to have them in some war shooting at people sounds too ludicrous, but then again isn’t war ludicrous to begin with?