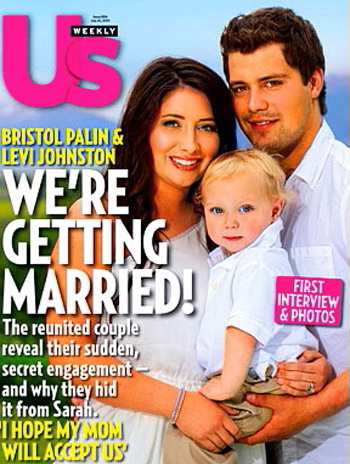 How much money can you make splashing your mug on a tabloid cover?

On, off, on, off, no back on. That is the official verdict this morning with the release of the latest Palin/Johnston horror go lucky story. A good look at the US weekly cover story will have all of you relieved that the little possums finally found love again and after cashing in their Western Union check got married. US weekly explains the joy for us…

US Weekly:Bristol Palin and Levi Johnston reveal exclusively in the new Us Weekly that they are getting married.

And, they tell Us Weekly, former vice presidential candidate Sarah Palin has been kept in the dark about their plans … until now.

“We got engaged two weeks ago,” Bristol, 19, tells Us Weekly. “It felt right, even though we don’t have the approval of our parents.”

Who needs approval from your parents when you’ve got a big fat check flying into your mailbox hole courtesy of America’s biggest tabloid whore. Can we all shout ‘payola’ all together?!

Bristol and Levi, 20 — who famously called off their previous engagement two weeks after welcoming son Tripp in December 2008 — tell Us Weekly they reconnected three months ago while working out a custody plan for their 18-month-old son.

“I really thought we were over,” Levi tells Us Weekly. “So when I went, I had no hope. I think we both just started talking — and then we took Tripp for a walk.”

Are you frothing and foaming at the mouth kids? I know we are. Don’t you wish your life was like this too? But what about the evil wicked grandmother from Alabama (I know, I know it’s Alaska, but who cares right?) – is she going to fly off the roof when she hears her daughter is getting back together with that good for nothing too photogenic media whore Levi?

Ironic, because half the country find Sarah’s aspiring political equally heart breaking. But who’s complaining when all the media cash registers are going a ching a ling?

The Palins released a statement on the Today show Wednesday morning: “Bristol at 19 is now a young adult. We obviously want what’s best for our children. Bristol believes in redemption and forgiveness to a degree most of us struggle to put in practice in our daily lives.”

In other words that bitch Sarah was behind the whole media coo to begin with. Somebody scream along with us- ” 2012- You Betcha!!”