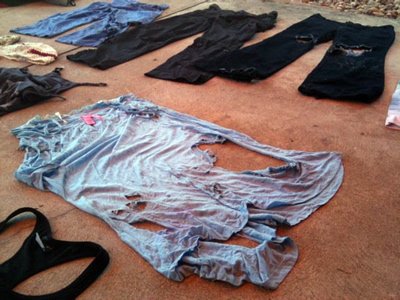 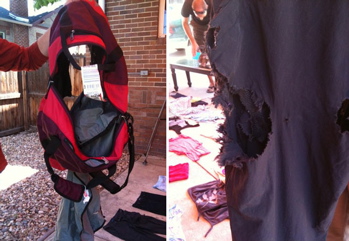 The trauma of having your luggage completely destroyed.


A tipster sent in these shocking photos, with an account of her story (surprisingly, it does not center around an in-flight bear attack). Her adventure began on June 13th at New York City’s own LaGuardia Airport—after many cancellations, boardings and deboardings of different flights (all on United), she finally got on a plane that lifted off for Colorado. Upon arriving, our tipster’s luggage was nowhere to be found, and three days later it turned up with no warning about the condition it was in. Everything was completely soaked, moldy and shredded (with some items missing all together); she tells us employees at the airport in Colorado didn’t know the protocol in dealing with her situation because they had never seen anything like it before.

On first read this all sounds disturbing and in fact it is. But like anything in life, once things get freaky, they stay freaky…

Customer service agents (via phone and in the airports) were uniformly unhelpful, made empty promises of monetary retribution to replace some of the goods during the trip, and yadda yadda yadda, it’s been over a week and there are still no answers.

Obviously anyone with half a brain understands trying to have a rational discussion with someone on the other end of an automated line who has no sense of time, place or personal investment in your torn luggage is a useless exercise in self asphyxiation. But that’s the wonderful thing about being human, we always want answers- even when in our guts we know there are no answers….that we’d like to believe.

That said the tipster is not giving up, because she can still tell right from wrong, even if a major airline company caught in the hind legs of its vacuuos existence can not…

The tipster, who happens to be a “premier” United Mileage Plus member, is currently traveling around the country and tells us: “Hours of my vacation, hundreds of minutes used on my mobile phone plan and several thousands of dollars have been either spent (on new items) or tossed aside (on irreplaceable items). I have been treated like garbage. My goal is to alert everyone I know of the disregard for my time and belongings, so they can avoid flying such a disrespectful and irresponsible airline in the future.”

United Airlines- should you be flying with them too soon?