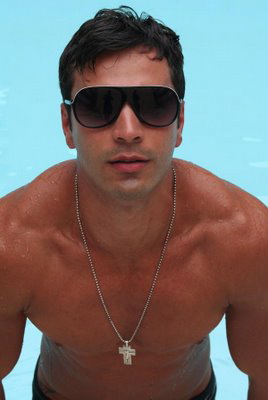 ‘If only you played more Donna Summer, I’d love you more…’

It’s the silly season and since we’ve all agreed being silly is the new social currency that will help you get laid more often (and of course richer and famous because someone told us this is America after all…) and more TV air time we’ve decided to introduce you to the cast of ‘My sideburns are better looking than yours.’ No really the show’s called ‘Jimmy’s whore bar.’ No? How about – ‘Pete’s giggly friends?’ Well it used to be called ‘Kept’ but now the producers have decided to call it ‘the A list.’ It’s essentially a show about a bunch of miserable too good looking gay men trying to figure out why they’re still broke, hungry and lonely. Oops, wrong show- this show is about a bunch of gay guys who are too good looking, fabulous and of course too overwhelmed with themselves, but not nearly as overwhelmed that you will be once they appear on your TV screens. That said let’s meet the cast before their first television spat shall we.

According to Gawker – professional arm candy and a good looking piece of ass.

Pros– Knows how to hiss menacingly at other men checking out his dude.

Cons– Tends to wears the same shirt two days in a row.

Claim to fame– Was the squeeze that let Lance Bass come out. Which in other words, he gave great oral service.

Pros– Can hold his drinks.

Cons– Has been known to pout at casting directors.

Claim to fame– Dated someone hunky and famous that we don’t care about. Does anyone really care about the bartender from the Greenhouse?

According to Gawker – resident paparazzo and media angler. Will be spending greater part of the season sleeping with his camera instead of his boyfriend by his side.

Pros– Knows how to take pictures in the dark.

Cons– Will sell you out faster than a crackhead short of a nickel.

According to Gawker – part time model which is just an euphemism for unemployed and social climber. Perfect for the show and what the public has come to appreciate from their reality stars.

Pros– Knows every door man that matters by first name.

Cons– Prone to staying out too late and not looking as pretty as his ex boyfriend Marc Jacobs would have liked.

According to Gawker, a model, part time model, an ex model, a model booker. You sort of get the drift.

Pros– Knows a lot of models.

Cons– Gold digger with no morals. Currently lives in a lavish apartment in Chelsea sponsored by his boyfriend and his bedtime behavior.

According to Gawker bitch works as a barber, oops we meant to say hair stylist to the stairs.

Pros– Knows how to have anonymous affairs.

Cons– Doesn’t like children or fluffy dogs that don’t fit into his Balenciaga purse.

Claim to fame– He’s a nobody that the producers felt sorry for.