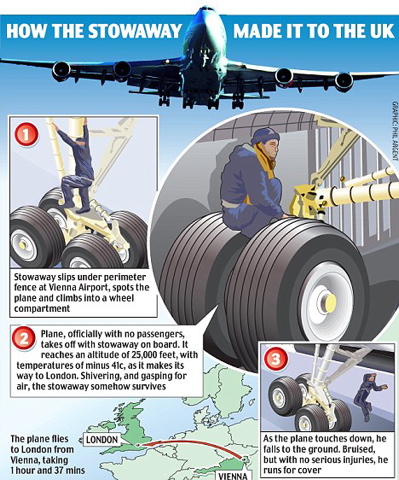 The things that happen over European air space.

Let’s meet the Romanian stowaway for whom right now because his name has not been publicly released and because Scotland yards is looking for him- we shall call Jack the Romanian. For those of you who don’t know this evening, Jack the Romanian is making world headlines because he managed to cling onto the wheels of a Boeing 747 owned by the Dubai royal family departing from Vienna, Austria to London where he survived save for a few cuts and bruises. Under any normal circumstances Jack should be dead now, but as you soon shall see Jack has all the luck in the world.


A stowaway hid in the undercarriage of a jumbo jet and survived temperatures of -41c at 25,000ft during a free flight into Britain.

The jobless Romanian crouched in the rear-wheel compartment during an extraordinary 800-mile trip from Vienna to London on a Boeing 747 owned by the Dubai royal family.

Airport officals say the man could easily have been crushed by the plane’s wheels or killed by a lack of oxygen and was ‘incredibly lucky’ to be alive.

But Jack of course wasn’t crushed, which led to Jack sitting down for a cup of tea with security as they tried to make sense of Jack’s compelling traveling arrangements.

Less than 24 hours later, he was released after accepting a police caution for being a stowaway and – because he is an EU national and proved his identity – was allowed to stay in Britain.

A police source said: ‘The plane would normally have flown at 37,000ft which would have killed him but it was flying lower because of thunder-storms.

Of course what Jack isn’t letting on is how he commissioned the skies to break out in a thunderstorm because the watch that Jack wears, a gift from his uncle Sergei back in the Communist 1970’s could predict weather patterns, particularly weather patterns over western Europe.

The man was carrying ID and immigration officials were satisfied he was Romanian and entitled to stay. Home Office sources confirmed there were no immigration issues and that the UK Border Agency was not seeking to deport him.

But as it turned out there are in fact issues and because Jack is roaming England with his uncle Sergei’s watch guiding him authorities have yet to have locate him and bring him back to Scotland yards who now have some niggling questions to ask Jack. Of course they needn’t bother, because tomorrow morning, Jack is going to catch another plane back to Romania where life makes more sense. 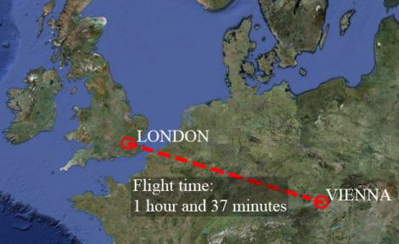