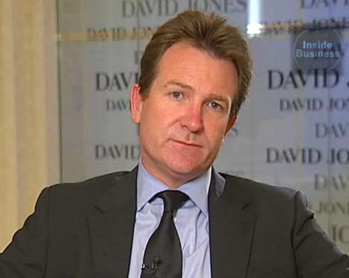 Even the kookaburras are wondering what happened.

There’s a brouha in Sydney, Australia this morning after the revelation once admired CEO of nation wide retailer David Jones, Mark McInnes was implicated in inappropriate sexual conduct with a female employee with McInnes suddenly resigning from his high paying job and fleeing the country with his 4 month pregnant partner. The type of business decision needless to say his employer, David Jones weren’t expecting McInnes to ever make…


Mr McInnes, 44, was one of the Sydney social whirl’s most eligible divorcees. He was charming, handsome, fit from his morning soft-sand runs along Bondi Beach and well-connected as the head of luxury department chain David Jones.

He was a bit of a male honeypot and he loved to flirt. Most women went along with it, enjoyed it even. It was all part of that double air-kiss social-scene schmoozing that went with the job.

But double air kissing it seems wasn’t quite enough for Mr McInnes.

But he knew this time he’d gone too far. He was sitting at his desk high up in David Jones’ temple in Sydney’s CBD early on the morning of Friday, June 11, when he was visited by one of the company’s HR managers.

Which between you and us is never a good sign…

A female employee – believed to be a married 25-year-old from marketing – was set to launch a legal complaint about his behaviour at two company functions within the previous two weeks.

The man credited with saving David Jones quit in disgrace yesterday and fled overseas from his beachside penthouse with girlfriend Lisa Kelly.

Which is if you’re ever going to escape repercussions, luscious penthouses in foreign locales would suit us fine too. Assuming we behaved inappropriately…

Those close to Mr McInnes stuck up for him, saying it was no crime to be “rampantly heterosexual”.

And of course who doesn’t mind rampant sexual behavior, especially if you’re one of those thin sexy blonde girls where an occasional graze, come on, or slur goes a long way….to offending you.