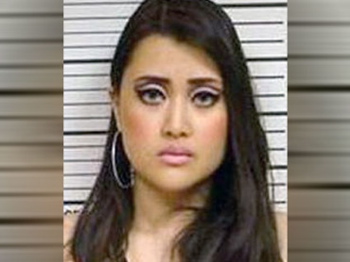 How to invent you are an heiress, a B grade actor while getting busted with 500 pounds of pot in the back of your gulf stream plane.

Lisette Lee will soon be appearing regularly on the news as the greatest tragedy and con man to have arrived west of Beverly Hills. Why you wonder? Let’s see if CBS news can clarify?

CBS: COLUMBUS, Ohio (CBS/WBNS) Federal agents say they have arrested Lisette Lee, a possible heir to the Samsung Electronics fortune, after allegedly finding more than 500 pounds of marijuana in her luggage.

Which isn’t bad work if you can get it (away with it). But then as authorities started probing the hot mess they discovered there was more to her than met the eye. Never mind the 13 bags of luggage that Lisette was carrying into 3 white vans…

According to WBNS, Lee told government agents she had no idea she was transporting drugs, but agents said they found cocaine and marijuana in her bag, along with a ledger that showed profits in excess of $300,000.

“She told investigators she was coming here to meet a boyfriend,”

Which suggests that all 13 bags belonged to her boyfriend and she was just the innocent unsuspecting drug mule who was too in love with her boyfriend to know she was being used as jail bait. But then Lisette realized she couldn’t remember her boyfriend’s name who must have been a moment’s way desperately looking for her.

The Columbus Dispatch continues: Lee told the agents that she is a model and a recording artist and was bringing equipment and belongings to a boyfriend who had bought a horse farm in Ohio, the complaint says. She, however, couldn’t provide the boyfriend’s last name.

Apparently the shock of him not greeting her and her 2 body guards, and 3 waiting white vans was too much for her and she lapsed into memory over load. Of course that’s when Lisette also remembered she was also a Samsung heir and a D grade Californian socialite.

Lee told the DEA that her family is associated with several multimillion-dollar businesses. Internet searches show she has had a small part in a movie called The Doorman .

Which must have been a welcome relief, because that kind of must have explained the dark false eye lashes and the clown make up on her face. Questioned further she told authorities that this was her fourth trip and each trip garnered her $60 000. She admitted the drug paraphenelia and cokie in her handbag was hers, but as for the other 13 huge luggages – items that belonged to a boyfriend who’s surname she couldn’t remember.

Anyway Lee is going to have 40 long years in jail to come up with his name.

Assistant U.S. attorney Tim Prichard said Lee faces five to 40 years in prison and a maximum fine of $2 million on the charges.