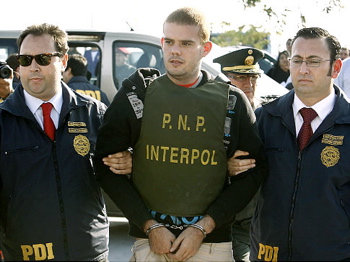 The death threats that keep piling on.

Things aren’t looking particularly good for our boy Joran over there in Peru. The prime suspect and confessed killer of American holiday maker Natalee Holloway in Aruba 5 years ago and of late a Peruvian girl- Stephanie Flores is now in need of a new lawyer after his lawyer, 54 year old Maximo Altez decided to call it a day after an avalanche of death threats starting coming his way. Surprised? Neither are we.

“I’ve received threats, many threatening e-mails. I’m an older person. This isn’t for me,” Maximo Altez, 54, told The Associated Press.

He would not describe the threats in a brief telephone conversation, saying only that he would stop representing the young Dutchman when members of Van der Sloot’s family arrive in Peru in the next few days.

So much for justice you wonder, but then again what’s a lawyer to do when a murderer is universally reviled. Become his next victim?

Prosecutors say Van der Sloot acted with “ferocity and great cruelty” in allegedly killing Flores. According to a transcript of the confession police say he made, Van der Sloot elbowed the young woman in the nose, strangled her with both hands, threw her to the floor, took off his bloodied shirt and asphyxiated her.

A scene that obviously hasn’t played well on the TV sets or the hearts or minds of the people of Peru and Aruba, and one dares imagines Holland (where Joran hails from) who must be shaking their collective head in dismay.

Van der Sloot is being held in a segregated block of the maximum-security Castro Castro prison in eastern Lima. He asked to be separated from the main prison population out of fear for his life.

The Dutchman has his own 2-by-3.5-meter (6.6-by-11.5-foot) cell, which is adjacent to that of a reputed Colombian hit man, a spokesman for the National Penal Institute told the AP, speaking on condition of anonymity for security reasons.

How ironic that Joran is living his latest holiday next door to a hitman. A fact that Maximo Altez is only too aware of. Joran welcome to the paradise holiday you’ve always wondered about…