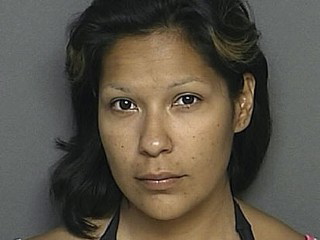 When a mother can no longer bear her kids.

There are days when all a mother wants to do is hide behind the blankets and cry and then there mothers who just want to dump the kids all together. This in a nutshell is the story of Arizona’s Christina Muniz who recently decided on a whim to dump her kids as she set out to rekindle her glory days in California. The Arizona Daily Star sheds some light for us:

— Arizona police officers arrested a mother after she reportedly told police she didn’t want her children any longer.

Police in the Phoenix suburb of Surprise say they received a 911 call Friday from an 11-year-old boy who said his mother was packing and moving to California and wasn’t taking him or his 6-year-old brother with her.

It perhaps would have been more understandable if Christina announced that she was leaving her boyfriend behind, the goldfish, the new Labrador puppy or even the golden coca seeds she probably likes to smoke in her glass bowl every morning but one has to applaud Christina for having the nouse to think she could just leave the kids in the driveway. Such bravado is normally reserved for coyotes and the occasional nihilistic predator who makes killing their Sunday afternoon sport. But then again this is America and somehow Christina has come to the conclusion that even her kids are disposable…

Police spokesman Sgt. Mark Ortega said the boy’s mother, Christina Muniz, 29, came out and told officers that she was “sick of her children” and wanted the police to take them so she can “have fun and play.”

Which makes you wonder, what do you do as a police officer think when you arrive to find Christina standing in front of the Jack Beam and the mirror trying to sort out her Friday and Saturday night revelrie out west sans the kids? After all if Christina has got to go party, who are we to get in her way?

As the children were being removed by CPS, officers said the 11-year-old attempted to hug his mother, and was met with a punch to the abdomen.

Which makes perfect sense because the little brat had just put a spanner in her party trekking. A good kick to the head would have sufficed too we imagine.

And now Christina wont be getting to party in California at all.