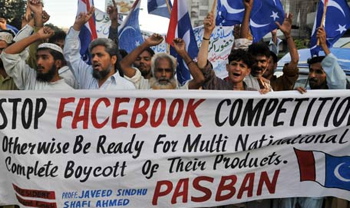 It turns out that Pakistan is as big a fan of South Park’s sophomoric satirists Trey Stone and Matt Parker creating a poorly drawn version of their prophet as much as you are watching of watching some you tube clip of some over excited parent changing nappies for the first time.

Indeed, some of the internet’s most popular websites, including Facebook, were blocked in Pakistan yesterday as officials sought to deny access to provocative images depicting the prophet Muhammad that many Muslims consider blasphemous, amid fears of possible street violence. Why Facebook you wonder? Well, that’s because yesterday a Facebook page was created inviting users to submit pictures of the Prophet Muhammad. Which you can only imagine didn’t go down pretty well in downtown Karachi, Pakistan…

The Facebook page at the center of the dispute — “Everybody Draw Mohammad Day!” — encourages users to post images of the prophet on May 20 to protest threats made by a radical Muslim group against the creators of “South Park” for depicting Muhammad in a bear suit during an episode earlier this year.

In addition to forbidding everything any twenty something does on any given nite of the week, Islam strictly forbids depictions of Muhammad, however hilarious. The fear is that too many depictions of their prophet might lead to a clash of civilizations over Muhammad Bobble-head sales over Jesus Bobble-head sales. This particular issue has proven to be a greater obstacle to radical Islam as plane landing, as anger over previous depictions of Muhammad have lead to a complete and utter dearth of Danishes in Karachi. In fact, Kurt Westergaard– the Dannish Cartoonist who created the majorly controversial cartoon showing Muhammad wearing a bomb in his turban–recently weighed in on the issue….

‘Everybody draw Muhammad’ initiative as important rebellion against self-censorship. The initiative should be understood as a manifestation of the freedom of speech, where Muhammad and my drawing have become icons for this cultural battle. I always think it’s brilliant when someone is moved by a debate. There is of course a risk of provoking some of the dark forces who are inspired by terrorism,.’

One can only assume that Mr. Westergaard made these comments from a 500 gallon Humvee armor plated man safe deep below the earth’s surface.

Free speech, no matter how lame and instigating, is an allowance that we in the rational world hold dear. Religious-inspired hatred comes from all radical faiths, and derives from sheer ignorance and a fundamental unwillingness to let other points of view make the time of day. Of course that doesn’t mean I still don’t hate all those weird parents who insist on video taping their little babooshkas taking a kaka…