How to get ahead without trying.

17 year old Georgia May Jagger is the hottest tart of St Tropez these days. How? Let’s all find out courtesy of trash journal the UK’s Daily Mail.

And Georgia May Jagger looked quite at home as she dolled up in a series of sensational – if slightly revealing – sheer outfits to take part in an unusual catwalk show for Chanel yesterday.

She may have been being ‘grounded’ by her famous parents, but they could hardly quibble with the classy way she broke their curfew.

Which is a round a bout of saying no one would really care about posh super model 5ft 4′ Georgie if she wasn’t sutured to her famous parents innards – Mick and Bianca Jagger. That said, feeling frisky the ‘grounded’ Georgie hauled her gorgeous bare posterior to the south of France where she had a hunch she would run into other frisky types. Continues the dailymail:
Georgia appears to be just as rebellious as her father once was, and looked pretty pleased with herself as she posed for pictures.
Can you see Georgie blushing? Grounded for being a cokie girl (Mick doesn’t approve of everything his little cherub does…) she suddenly finds herself smirking and wondering how it all ever got so easy…
And then yesterday, she was the centrepiece of the Chanel Cruise 2011 show, outshining even the Victoria’s Secret model Karolina Kurkova.
Can someone teach all the starving 5ft 10′ Brigitte Bardot’s trampling in Milan how to pull this off?
The teenager is said to have earned close to £600,000 from a three-year £1million deal with jeans manufacturer Hudson.

She has already appeared on the front cover of Vogue, and become the face of campaigns for Rimmel and Versace.

Of course that’s something any aspiring 5 ft 4 Brigitte Bardot can pull off while attending high school, never mind them other skinny 5 ft 10 tarts strutting it in their 5ft 10 hate stares in piazza Garibaldi, catzo Milano. Thank God Mick and Jerry didn’t have to hussle, because that would be a bad thing for Georgie to ever have to get round to. 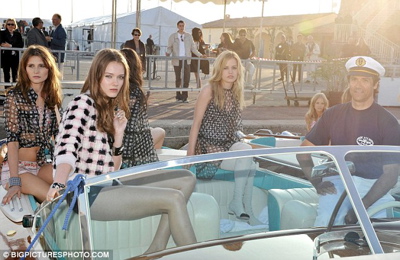 And then she had a hunch she’d run into other frisky types and become the campaign girl.