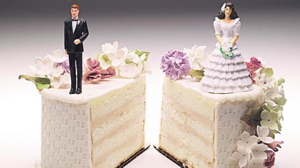 The inconvenient things that happen to some brides.

This is one of the more charming stories we have come across in a while and at this stage we’re not sure whether to laugh or cry or better still let you figure it out.  The ‘Ny Gutter’ (as we affectionately like to call the NY Post reports…)

A Manhattan monster-in-law was so convinced her son’s fiancée was a no-good gold digger that she did everything she could to break the couple up, even harassing the fiancée’s ailing father in Ohio and getting her fired from her job in Midtown.

Well who could blame her, have you seen how all those girls keep taking their top off for Donald Trump? Never mind that Lia Joseph’s son Denis only had eyes for Diana David whom we can still imagine once loved Denis very very much, until that is, mom got in the way…

In response, Lia allegedly did what she could to make sure her son had no money for his bride to take, and went on a campaign to ruin her son’s business interests in Brooklyn and Connecticut, Denis claims.

Does this sound like Dale Mercer defending her daughter Tinsley from the wicked witch of the East Hamptons- Devorah Rose? – “No you can’t be my daughter’s friend- you’re a Venezuelan peasant!”

The mess continued and heightened with mom pretending to be her son’s landlord, a new employer that was calling Diana’s place of work looking for her, threatening to sue Diana’s family on the eve of her father’s heart bypass surgery and all sorts of wonderful disasters that let to Denis eventually taking his mom to trial for terrorist behavior.