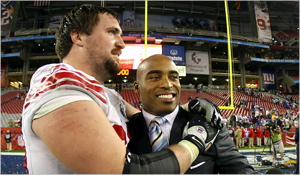 The spotlight has shone on quite a few less than brilliant dads in the last few months – Tiger, Charlie,  Jon Gosselin. But let’s face it, none glows with the quite the same aura of “I’m a Walloping Scumbag Idiot” as Tiki Barber. Here’s why: Tiki Barber didn’t get caught. It wasn’t a wife with a golf club or the failure of the usually-foolproof moustache disguise that got Tiki and his 23 year old twit, Traci Lynn Johnson in the headlines.  Nope! It was Tiki’s own (no doubt well considered) decision to leave Ginny Cha, his wife of 11 years for his true love, NBC intern-with benefits, Traci while Ginny was not 1 not 2, not even three – but a grandiose, drum-rolling 8 months pregnant with Barber’s twins! Twins! Good God damn.

Tiki, Tiki, it’s one white-lie to call yourself an old fashioned family man while boning another blonde stick figurine in her college dorm room. But waiting until your wife is 8 months pregnant, well that’s just goddamn slow.

What were you thinking?  Maybe during months 1 through 7 we can appreciate you were devising ways to have your lady-cake and eat it too. Sneak sex into a babysitting contract. You know lawyers are great with stuff like that. Or join an outdated Mormon sect wandering the hinterlands of Utah. Wait for your fairy godmother of man-whoring to grant you some much-needed wishes. Poof* Poof* Poof* Wife and kids have disappeared! Or maybe, yes maybe, Tiki, spend those eight months deliberating the odds of death in childbirth.

We know Tiki, wouldn’t that have all been great? No forking over those sweet, delicious dollars in a big divorce settlement. No public warring. Nobody knowing how gross you really are! But then someone had to go tell Tiki that death in childbirth was not the cat in the bag it used to be. And that thinking that way was kind of f&*^ed up. Ruining everything. Shucks, Tiki. Life is brutal.

But hey, hey, hey Tiki: Let’s cut you some slack. We are after all denying you one of the great realities of life. You being an athlete and all, and we all know how athletes are dumb. Tiki, we get it, you were probably spending those 8 months trying to figure out why Ginny was getting so fat again.