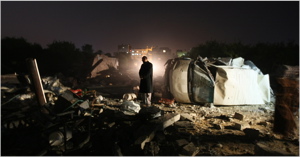 More rockets and terror just to remind the world that we are savages.

Far be it for this author to offer moral judgment or an assessment for what passes as credible foreign policy with respect to the continued assaults between the Palestinian movement and the state of Israel I am nevertheless inspired to reflect on the latest series on events that have now suddenly taken place and should give world citizens pause for wonder.

Israeli planes have carried out 13 air strikes on the Hamas-ruled Gaza Strip, Palestinian sources have told the BBC.

Four of the strikes took place near the town of Khan Younis, where two Israeli soldiers were killed in clashes with Palestinian fighters last week.

The latest violence is the most serious since the end of Israel’s assault on Gaza in January 2009.

Palestinians and rights groups say more than 1,400 Gazans died in the conflict, while Israel puts the figure at 1,166. Thirteen Israelis, including three civilians, were killed.

Retaliation perhaps? But then again the Palestinians can argue last weeks actions were retaliations for something that happened the week, month, year, decade, century before – which is in fact an often cited mantra by both parties. What ever inspired the conflict the general apathy in the West is alarming, because as much as we can all read about Lindsay Lohan’s personal problems and amuse ourselves here in the west, disregard for battles that somehow end up influencing events back in the US need to be considered.

So is the west prepared to take a stand or are they going to continue watching these two groups beat each other up and take what ever sides when it is convenient for them. After all those are real people, whether Israeli or Palestinian lives that are so often being destroyed and some sort of redress of issues is in order or is?

Hamas Prime Minister Ismail Haniya has called on the international community to intervene in the latest cycle of violence between Gaza and Israel in order to avoid a possible escalation.

“We are contacting the other Palestinian factions in order to reach an internal consensus as to the measures we may take in order to protect our people and strengthen our unity,” Mr Haniya said.

Israel says there have been at least 20 rocket or mortar attacks in the past month that have landed on its territory, one of which killed a farm worker.

The BBC’s Jon Donnison, in Jerusalem, says Israel appears to be sending a signal that whenever there is militant activity inside Gaza it will respond.

This almost sounds too cynical on behalf of Jerusalem. Why not appeal to an arbiter to bring closure to these aggravated assaults and why perjure yourself by behaving just as grievously as your attackers. Of course this hasn’t stopped the US from going it alone either and taking it’s own stands, so perhaps listening to the occasional US initiative to come to the bargaining table is met with large degrees of perceived scepticism. After all, if the school principal can go and misbehave at will why should the school pupils bother to even to take him seriously when the school principal  is as or even more complicit in their own duplicitous actions?

In the end, there is a lot of savage behavior going on, and most of it is happening back here in the US.