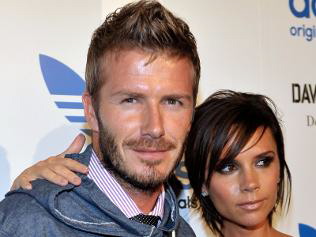 The many demanding feats that David Beckham is forced to ‘perform.’

Posh and David one can arguably say lead the perfect life. He is the much ballyhooed captain of the English soccer team, makes lots of money showing off his stomach muscles on the side and gets to live an idyllic life in Los Angeles. Victoria too can savor a successful recording career, a myriad of modeling gigs, which coincedentally have her showing off her stomach muscles and to boot (pun intended)  the couple have 3 boys. Well that it seems is the problem. That they have 3 boys and not one girl and of course Posh has decided that life wont be perfect again until the little pitter patter of a little girl is heard around the house. Sounds fine right? Well, there’s a catch and the world is wondering if David can hold on. The Daily Telegraph out of Australia explains in no uncertain terms…

Not a problem for most lads, but a problem when you’re carrying a series of injuries that sometimes prevent you from getting out of bed, let alone ‘performing’ in it.

Posh, who longs for a daughter, has set up a baby chart showing the best times to conceive.

The 35-year-old former Posh Spice and Queen WAG kicked off the plan during the family’s Easter break in the Caribbean that left injured English soccer idol Becks flat on his back.

Golden Balls, 34, has told friends he is struggling to keep up with his rampant missus as he limps around with strapping on his Achilles tendon.

Really, the problem is that the missus has worked out that David has the best possible genes in the world and that no real good will be done until they too can conceive a female version of their  benevolent selves. Of course as appealing and rigorous are the demands of certain married lives, we think that David in due course will be able to score the goal his precious wife is ‘rooting’ for him to score.One way or another we’re rooting’ for David.