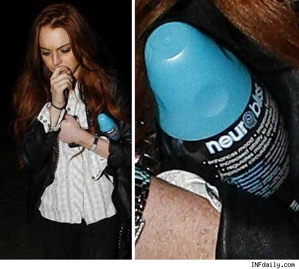 When America’s favorite media whore finds herself $23 000 behind rent.

According to TMZ today, Lilo, consummate media whore, finds herself in a very prickly affair. What affair may you wonder? The part that says that her landlord is asking for back rent owed to them to the tune of $23 000.

Lindsay Lohan is broke — so much so, she can’t even pay her rent on time, sources tell TMZ.

We’ve learned Lindsay was two months behind in rent and her landlord sent her a legal notice to pay or get out. Lindsay just paid her landlord $23,000 to become current.

What’s worse … Lindsay isn’t pulling in any income and her prospects for work are almost non-existent because of substance abuse issues … according to our sources.

That said we’ve compiled a list of options that Lilo should carefully consider before she heads out tonight to another crack den.

1/ Get a job. What type of Job? There a lot of out of work actresses that work as waiters and bartenders. Having lots of experience drinking she should have no problem making every drink under the sun.

3/ Find a rich boyfriend who will turn you into a trophy girlfriend. These type of guys can all be found at the Rose Bar, NY, but be careful of the competition.

4/Begin auditioning again. There’s always some pilot getting off the air and Lilo could always play the part of the distressed disillusioned junkie.

5/ Ask her family for a loan. Of course that’s like asking for blood out of a stone. So let’s drop that option.

6/Lilo can refuse to move and become a squatter. This will further help generate her cult image as bohemia.

7/ Move to Canada. No one really cares about Lilo there and she should be able over time to migrate to an anonymous life there. Of course that too is like asking for blood out of a stone.

8. Become a full time crack whore and earn her keep.

9/ Announce a telethon on TV, with someone like Larry King, where for 24 hours she will strip, sing lully buys and gently coerce you to donate all the while as Larry King strokes her penis.

10/ Team up with Sarah Palin and go work for FOX, as a FOX whore. We’re sure the ratings will go off the roof, otherwise we’re sure there are a dozen other fashion lines who like Ungaro will gladly make Lilo their creative director and watch their business go down the drain.

The paparazzi are now wondering when Lindsay Lohan will ‘kick’ the bucket.

Is the world turning against Lindsay Lohan?

Lindsay Lohan Causes Ungaro’s On Madison Ave To Close Down.